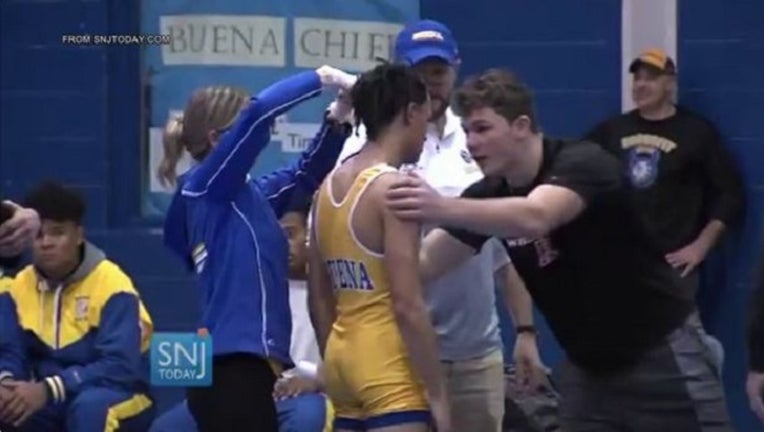 TRENTON, N.J. - A New Jersey referee has been placed on a two-year suspension following a December 2018 incident in which a high school wrestler had his dreadlocks cut on the mat before a match, rather than forfeit, authorities announced Wednesday.

The announcement came in the wake of an investigation conducted by New Jersey's Division on Civil Rights (DCR), which resulted in an agreement between the DCR and the state's Interscholastic Athletic Association (NJSIAA).

Buena Regional High School wrestler Andrew Johnson, who identifies as mixed race, had a cover over his hair during a match on Wednesday, Dec. 19. But referee Alan Maloney, who is white, said that wouldn't do. An SNJ Today reporter tweeted a video of Johnson getting his hair cut minutes before the match. Johnson went on to win but appeared visibly distraught.

The video was shared widely on social media, with users calling the incident "racist," ''cruel" and "humiliating."

Maloney came under fire in 2016 for using a racial slur against a black referee, according to the Courier Post newspaper. Maloney told the newspaper he did not remember making the comments. After the incident was reported, he agreed to participate in sensitivity training and an alcohol awareness program. A one-year suspension was overturned.

In addition to Maloney's suspension, the agreement calls for implicit bias training for officials and staff involved in high school athletics across New Jersey.

The DCR also issued a new “Guidance on Race Discrimination Based on Hairstyle” to explain when treating people differently due to their hairstyle may violate the state’s anti-discrimination laws and to help prevent such discrimination in the future. It clarifies that policies that ban, limit or restrict hairstyles closely associated with being black or having black ancestry — including twists and locs — may violate New Jersey law.

“Student athletes should be able to compete with each other on a level playing field,” said Attorney General Grewal. “Racial discrimination in the enforcement of the rules of any sport is inconsistent with the spirit of fair play.”

“Discrimination against Black people because of their hair, which is often based on stereotypes that traditionally Black hairstyles are ’unprofessional‘ or ’unkempt,’ is a persistent form of anti-Black racism,” said DCR Director Rachel Wainer Apter. “This guidance makes clear that employers, housing providers and places of public accommodation cannot police Black hair. And the [agreement] will ensure that high school athletes across the State can focus on being their best, not worrying that their hair will subject them to differential treatment based on race."