MELBOURNE, Australia - Novak Djokovic won a court battle Monday to stay in Australia to contest the Australian Open after his exemption from strict COVID-19 vaccination rules was questioned, but the drama might not be finished, with the government threatening to cancel the tennis star's visa a second time and deport him.

Federal Circuit Court Judge Anthony Kelly reinstated Djokovic’s visa, which was revoked after his arrival last week because officials decided he didn’t meet the criteria for an exemption to an entry requirement that all non-citizens be fully vaccinated. Djokovic's lawyers say that since he recently recovered from an infection, he didn't need to be inoculated under Australia's rules.

The judge ruled the No. 1 player had not been given enough time to speak to his lawyers before the decision about his visa was made and ordered the government to release him within 30 minutes from a Melbourne quarantine hotel where he has spent the last four nights.

But government lawyer Christopher Tran told the judge that the immigration minister "will consider whether to exercise a personal power of cancellation."

That would mean that the nine-time Australian Open winner and defending champion could again face deportation and could miss the tournament, which starts on Jan. 17. It could also bar him from the country for three years.

The back and forth has gripped the world and caused a furor in Australia, where many initially decried the news that Djokovic, who has been a vocal skeptic of vaccines, had received an exemption to strict rules to compete in Melbourne. Many felt the star, who court documents say is not innoculated against COVID-19, was being given special treatment since Australians who aren’t vaccinated face tough travel and quarantine restrictions.

But when border police then blocked him on arrival, others cried foul, saying he was being scapegoated by an Australian government facing criticism for its recent handling of the pandemic.

But he said the family was still hearing that his brother might be detained, though he gave no details.

"This is definitely politics, all this was politics," he added. 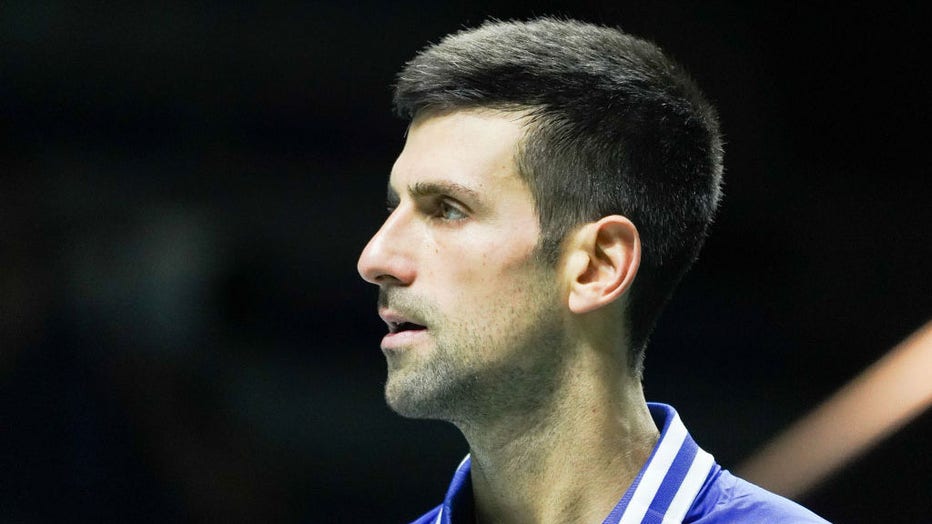 FILE - Novak Djokovic of Serbia in action during the Davis Cup Finals 2021, Semifinal 1, tennis match played between Croatia and Serbia at Madrid Arena Pavilion on Dec. 3, 2021, in Madrid, Spain. (Photo by Oscar Gonzalez/NurPhoto via Getty Images)

The office of Home Affairs Minister Karen Andrews confirmed that Novak Djokovic has not been arrested. It was not clear where he was, though hundreds of fans gathered late Monday outside his lawyers' office in Melbourne, many carrying Serbian flags and wearing the banner's red, white and blue colors. They chanted "Free Nole," using the star's nickname. Police later dispersed them when they surrounded a car trying to leave the area.

Spanish tennis star Rafael Nadal called the controversy "a circus" and said he supported the decision allowing his rival to play in the upcoming tournament.

"Beyond me agreeing or not with Djokovic on certain things, there’s no question that justice has spoken and has said that he has the right to take part in the Australian Open," Nadal said Monday during an interview with Spain’s Onda Cero radio.

The 34-year-old Djokovic boarded a plane for Australia last week, after receiving an exemption from vaccination rules from Victoria state authorities and Australian Open organizers. But upon arrival, federal border officials refused to let him in, saying the exemption was not valid.

The reversal led some to cry foul, with Prime Minister Scott Morrison’s conservative government seeking re-election for a fourth term in polls due by May.

While his government was widely praised for containing the nation’s COVID-19 death toll at the start of the pandemic, he has recently loosened some rules, just as omicron cases have been rapidly surging. He has been criticized for that strategy as well as for shortages of rapid antigen tests and for refusing to make the tests available to all for free.

At Monday's court hearing, Djokovic's lawyers argued their client did not need proof of vaccination because he had evidence that he had been infected with the coronavirus last month.

Australian medical authorities have ruled that people who have been infected with COVID-19 within six months can receive a temporary exemption to the vaccination rule.

Judge Kelly noted that Djokovic had provided officials at Melbourne’s airport with a medical exemption given him by Tennis Australia and two medical panels.

"The point I’m somewhat agitated about is what more could this man have done?" Kelly asked Djokovic’s lawyer, Nick Wood.

Wood agreed that his client could not have done more, noting that transcripts of Djokovic’s interview with Border Force officials and his own affidavit revealed that he repeatedly told officers he had done everything he thought was required of him.

But lawyers for Home Affairs Minister Andrews said in their submission that the vaccination exemption could only be granted for travelers who had recovered from a serious bout of COVID-19.

"There is no suggestion that the applicant (Djokovic) had ‘acute major medical illness’ in December" when he tested positive, the written submission said.

But in the end, the government lawyers eventually conceded that the decision to proceed with interviewing Djokovic in the early hours of Thursday and cancel his visa before he could contact Tennis Australia or his lawyers was unreasonable.

Djokovic was told at 5.20 a.m. on Thursday that he had until 8.30 a.m. to respond to a notice of intention to cancel his visa. His comments were sought instead at 6.14 a.m.

The decision to cancel his visa was made just over an hour later.

Minister Andrews did not immediately responded to a request for comment. But a spokesperson for Alex Hawke, minister for immigration, citizenship, migrant services and multicultural affairs, acknowledged the court’s decision, adding the minister’s personal discretion remains in play.

"The minister is currently considering the matter and the process remains ongoing," the spokesman said.

The virtual hearing crashed several times because of an overwhelming number of people from around the world trying to watch the proceedings.

At one point, an expired court link was apparently hacked and broadcast pornography, The New Daily News website reported.