(FoxNews.com) - An Oregon woman is behind bars after she was busted with a large amount of meth, a handgun, a knife, and a throwing star, officials said.

Kathelina Test, 22, was pulled over at around 9 p.m. Saturday in Aloha after she was seen leaving a "known drug house," the Washington County Sheriff's Office said in a statement.

"In addition to a large quantity of methamphetamine, Ms. Test was in possession of a handgun and restricted weapons," officials said.

A photo shared on the sheriff's office social media pages showed Test had with her a plastic bag that appears to contain drugs, a large knife, a handgun, a cell phone, an undisclosed amount of money and a throwing star.

According to KOIN, there were four other people in the vehicle with Test.

The other three men were given a variety of charges including heroin possession and parole violations. They are currently being held in the Washington County Jail. 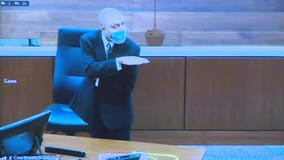 The process to select a jury for the Darrell Brooks trial is back underway in Waukesha County court on Tuesday morning, Oct. 4.