Authorities fired water cannons and detained protesters in Minsk, Belarus, on October 4, during the 57th day of consecutive demonstrations against the reelection of President Alexander Lukashenko.

More than 100,000 people marched in Belarus' capital on Sunday to protest against the country's authoritarian leader, who won his sixth term in office in an election widely seen as rigged.

The demonstrators demanded the resignation of President Alexander Lukashenko, and freedom for political prisoners. Police used water cannons in an attempt to disperse the crowds, but the protesters remained undeterred.

One video from the rally showed a group of protesters approaching a water cannon vehicle, opening a hatch on its side and removing pieces from inside the vehicle. Media reports say the water cannon malfunctioned after that and drove away.

The Viasna human rights center said that about 120,000 took part in a rally on Sunday. 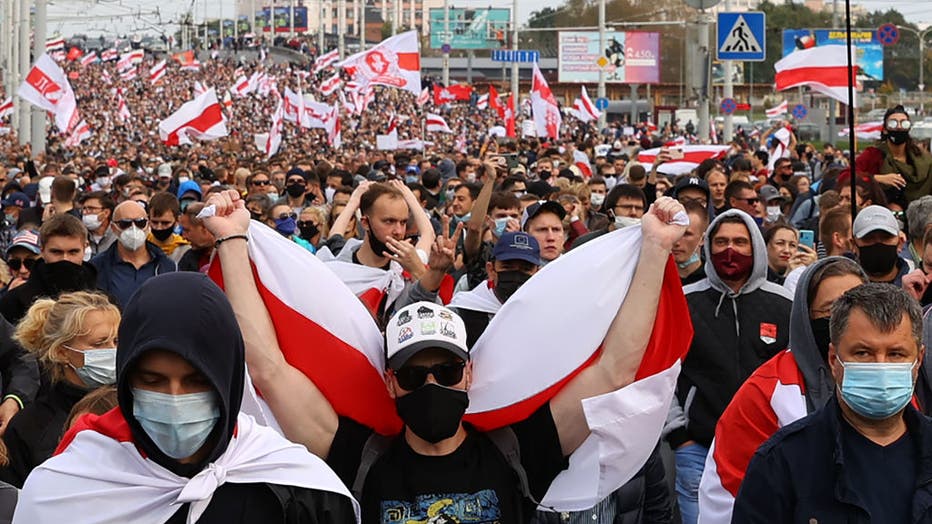 FILE - Belarusian opposition supporters take part in a protest event demanding freedom for political prisoners. Mass protests against the presidential election results have been erupting in Minsk and other Belarusian cities since 9 August. (Andrei PokumeikoTASS via Getty Images)

Mass protests have rocked Belarus for almost two months, with the largest rallies taking place on Sundays and drawing up to 200,000 people. The unprecedented wave of unrest was triggered by the results of the Aug. 9 presidential election that handed Lukashenko, who has run Belarus with an iron fist for 26 years, a crushing victory with 80% of the vote.

His main challenger, Sviatlana Tsikhanouskaya, got only 10%. She and her supporters refused to recognize the results as valid, saying the outcome of the vote was manipulated.

In the first days after the vote, Belarusian authorities cracked down brutally on the protesters, with police detaining thousands and injuring scores with truncheons, rubber bullets and stun grenades.

The government has since scaled down on the violence, but kept the pressure on, detaining hundreds of protesters and prosecuting top activists. Many prominent members of the Coordination Council, formed by the opposition to push for a transition of power, have been either arrested of forced to leave the country.

On Sunday, dozens of people were detained in Minsk and other cities. Viasna released a list of detained protesters on its website that by Sunday evening had over 160 names on it.

“A campaign of intimidation and persecution, unprecedented for Europe, has been launched in Belarus against peaceful citizens who want one thing — free elections,” Bialiatski said.

According to the Belarusian Association of Journalists, 11 Belarusian reporters were detained Sunday in several cities. Last week, Belarus' Foreign Ministry rescinded the accreditation of all journalists working for foreign news outlets and said they must apply for new credentials.

Tsikhanouskaya, who entered the presidential race to run instead of her husband Siarhei, a popular opposition blogger jailed in May, issued a statement Sunday supporting the protest and demands to free political prisoners.

She herself was forced to leave Belarus in fear for her safety and that of her children and is currently in exile in Lithuania.

“Let the whole world see: Belarusians want to live in freedom, not in prison,” she added.