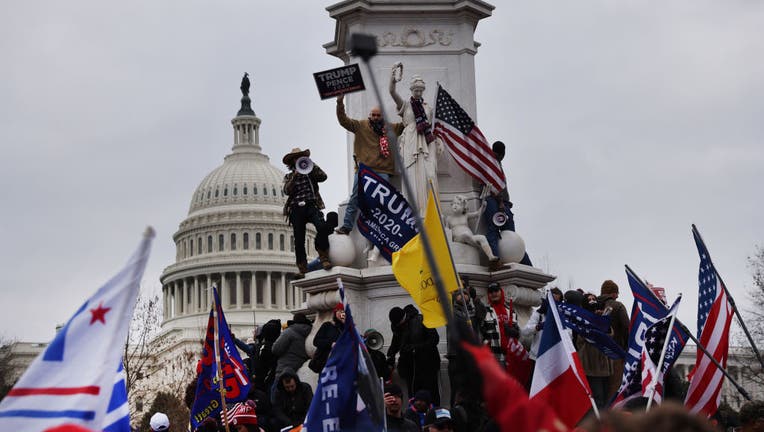 WASHINGTON, DC - JANUARY 06: Trump supporters gather outside the U.S. Capitol building following a "Stop the Steal" rally on January 06, 2021 in Washington, DC. A pro-Trump mob stormed the Capitol earlier, breaking windows and clashing with police of

LEBANON, Pa. - A Pennsylvania police officer is facing federal charges stemming from the Jan. 6 assault on the U.S. Capitol by supporters of former president Donald Trump over the results of the 2020 election.

North Cornwall Township officer Joseph Fischer, listed as a patrolman on the department's site, is charged with obstruction of law enforcement during civil disorder, entering a restricted building, violent entry and disorderly conduct on Capitol grounds and obstruction of justice.

Authorities say that he posted a Facebook video showing the recorder entering the building and getting into a "physical encounter" with at least one police officer. They say Fischer was captured on body camera footage from a police officer who was among those trying to push demonstrators out of the Capitol building.

The next day, authorities say, Fischer said on Facebook that there had been "some minor destruction and a few things were stolen" but things were "98% peaceful." The post also said "we pushed police back about 25 feet. Got pepper balled and OC sprayed, but entry into the Capital was needed to send a message that we the people hold the real power."

Authorities say Fischer later said on Facebook that he "may need a new job" but has "no regrets" because "if that is the price I have to pay to voice my freedom and liberties which I was born with and thusly taken away then then must be the price..."

North Cornwall Township police said in a statement that Fischer had been suspended without pay, saying that while citizens have the right of free speech they must also be accountable for their actions and "the United States of America is a government of laws which we are sworn to uphold."

"Neither the township nor any officer or employee endorses, accepts, or condones any alleged participation in a crime against the United States of America nor any act committed by an individual who may have illegally breached the United States Capitol on January 06, 2021," the statement said.

Court documents don't list an attorney for Fischer and a message could not be left at a number listed for him; a message seeking comment was sent to his police department email address.