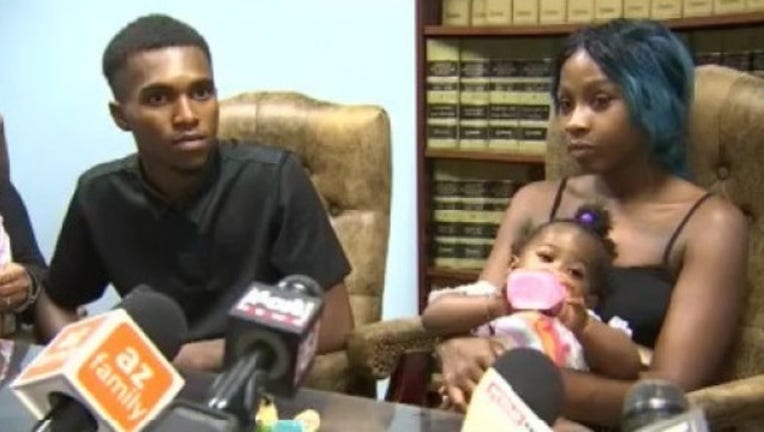 The Phoenix Police Chief offers an apology to those involved and the community after a video of officers responding to an incident goes viral.

Phoenix Police Chief Jeri Williams spoke with Fox 10 about her thoughts on the situation and what's next for the investigation.

“I apologize to the community, I apologize for the actions of our employees out at the scene,” said Chief Williams.

"Each time I watch it, it becomes more and more disturbing because that's not representative of the other 2900 police officers we have," said Chief Williams.

The incident happened May 27 when police received a call that the family's four-year-old had stolen a doll from a nearby Family Dollar.

Ames and his fiance Iesha Harper are suing the city for ten million dollars, claiming Phoenix police violated their rights.

According to the police report, Harper became verbally abusive when he told her to put her one-year-old child on the ground, but fails to mention how the mother and her two girls were held at gunpoint.

"We want our residents to feel confident in the department, feel safe here. We have been having a dialogue about how we can do better," said Phoenix mayor Kate Gallego.

Chief Williams said that "there is more to the story" and that the adults "made the decision to go into a business and take items."

According to the police report, the individuals got into a car and fled the scene after taking items from a store. The car first stopped and a woman got out, then the car stopped again which is when the officers made contact.

"The car fled again and that's when we get to the contact of the employees so that's where the troubling part starts," explained Chief Williams.

An investigation is underway into the actions of the officers and could take a few months to complete.

Chief Williams said she has not yet spoken to the officers involved due to investigation purposes but has had many talks with officers currently working on the streets about staying professional and encouraging them.

In the meantime, the department will continue rolling out more officer-worn body cameras to all precincts and working on building trust within the community.

"It was going to take 30 days to get each precinct up and running," said Williams. "We have a little bit over 600 cameras out there in two precincts. We're starting with our third precinct out of six tomorrow."

"The AACCC supports law-abiding peace officers who we believe are the majority of Phoenix PD. However, there is a destructive and dangerous systematic cancer in the department which Chief Williams inherited when she became chief three years ago. We are grateful to God for her integrity, experience, transparency and courage to continue to pull the covers back instead of sweeping corruption and justice under the rug."

The mayor has called for a community meeting on Tuesday, June 18 at 6 P.M. at Pilgrim Rest Baptist Church to listen to concerns.