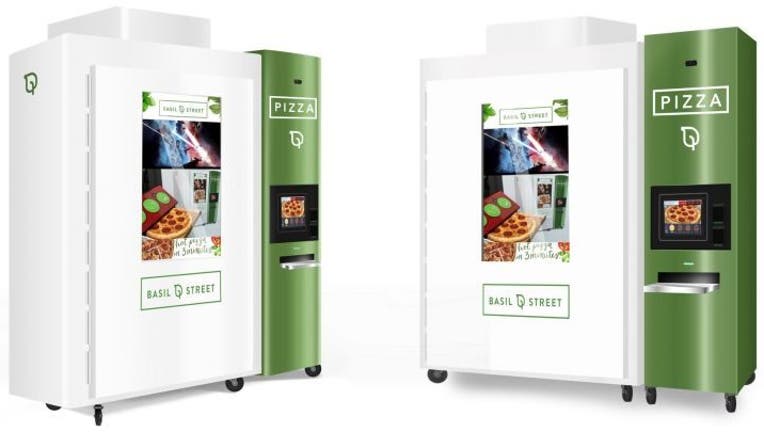 Your next slice of pizza could come from a vending machine.

Pizza maker Basil Street announced in a press release that it has closed a $10 million round of funding ahead of its planned pizza-vending pilot rollout out in April.

The machines use state-of-the-art robotics technology to prepare each order with fresh ingredients, flash freeze to preserve and then cook to order in three minutes, according to the company. Each machine features three Italian-style, 10-inch, thin-crust pizza options, including a four-cheese pie, a pepperoni pie and a rotating pizza of the month.

Prices range from $6.95 to $11.95, the company said, and customers can eventually find the machines in airports, military bases, college campuses or grocery and convenience stores.

"After three years of perfecting the process to deliver unmatched brick-oven style gourmet pizza through the convenience of a stand-alone vending machine, we are excited about the next step to bring this unique proprietary concept, and more importantly great tasting pizza, to market," Basil Chief Executive Officer Deglin Kenealy said in the release. "This round of funding enables us to kick-off our pilot program next month with the hopes of escalating into a full-scale launch of our kiosks by the end of Q3 in 2020.”

Basil said the machines built as part of its pilot program are in high demand and that it has received multiple requests for machines, including two that it will send to a partner it called “one of the world's largest food and beverage manufacturers.”

Locations for the pilot program haven’t yet been confirmed, but target locations include regions in Kansas, Missouri, North Carolina, Southern California and Texas.

The company, which said in a separate report that its machines will be available 24 hours a day all year, estimates the U.S. pizza market is worth $45 billion and that more than 80 percent of consumers eat pizza at least once a month.