The historic announcement was made Saturday, April 24 which is Armenian Genocide Remembrance Day.

The White House released a statement saying, "The American people honor all those Armenians who perished in the genocide that began 106 years ago today. Today, as we mourn what was lost, let us also turn our eyes to the future—toward the world that we wish to build for our children. A world unstained by the daily evils of bigotry and intolerance, where human rights are respected, and where all people are able to pursue their lives in dignity and security."

The president has rejected a long-lasting foreign gag-rule in American history.

It’s been decades since a US president has described the events that occurred in 1915 as ‘genocide’. President Ronald Reagan cited the Armenian Genocide in a 1981 proclamation.

Several US presidents in the past vowed to recognize the genocide but fell through on their campaign promise… mainly due to the US being an ally with Turkey.

The Turkish government has long since denied their actions.

"Instead of acknowledging the mass atrocities, the government of Turkey has waged a multimillion-dollar campaign of denial, hiring top public relations firms to whitewash the truth and erase it from the annals of history," according to a statement from the Armenian Assembly of America.

During the genocide, millions of Armenians fled the country and found refuge in nearby countries like Lebanon, Syria and the US.

April 24, 2021 marked the 106th anniversary of the genocide. Every year millions of Armenian-Americans take to the streets to protest and urge the US government to recognize the genocide and cut ties with Turkey. And this year the wishes and demands of so many where finally met.

For many Armenian-Americans this recognition was long overdue.

"The presidential recognition is just another milestone in our March for truth and justice," said Armen Sahakyan, Executive Director of the Armenian National Committee of America Western Region (ANCA-WR).

"Recognition of the Armenian Genocide honors the memory and dignity of its victims and survivors, while – more broadly – rejecting the use of human rights as a bargaining chip. In elevating genocide and atrocity prevention to the level of moral and political imperative, this recognition honors all victims of the scourge of genocides past and present – making future atrocities less likely," read a statement from the ANCA. 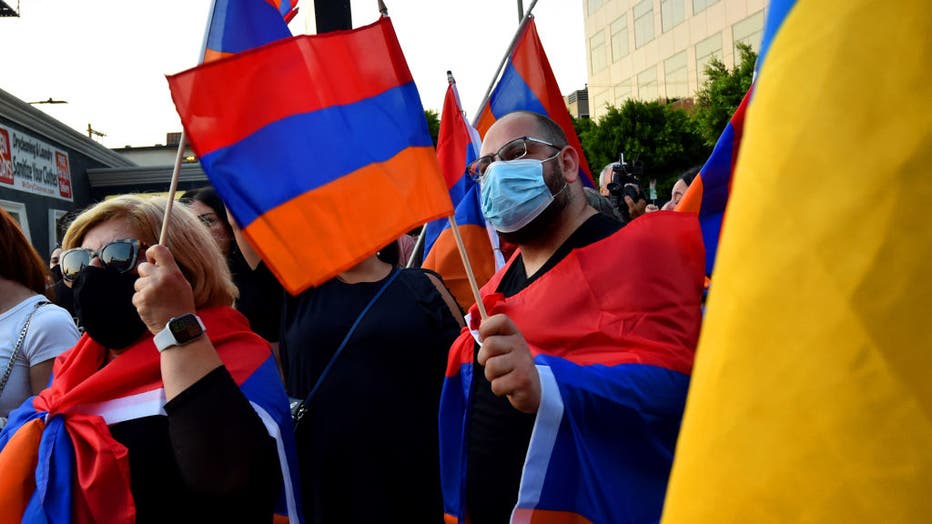 LOS ANGELES, CA - SEPTEMBER 30: Protest by the Armenian Youth Federation outside the Azerbaijani Consulate General against Azerbaijan's aggression against Armenia and Artsakh on Wednesday, September 30, 2020 in Los Angeles. (Photo by Keith Birmingham

House speaker Nancy Pelosi issued the following statement, "On April 24, and every day, we remember the victims and survivors who endured nearly incomprehensible suffering and pledge to honor their lives by recognizing this brutality for what it was: genocide. But tragically, the truth of these heinous crimes has too often been denied, its monstrosity minimized. That is why our hearts are full of joy that President Biden has taken the historic step of joining Congress with formal recognition on Armenian Genocide Day."

Governor Gavin Newsom also issued a proclamation declaring April 24, 2021 as "A Day of Remembrance of the Armenian Genocide" in the State of California.

More than 100 House members signed a bipartisan letter to Biden calling on him to become the first US president to formally recognize genocide.

RELATED: Armenian genocide: What happened, and why Biden’s recognition matters

Schiff spoke with FOX 11 on Wednesday about his push to the president.

Rep. Adam Schiff joined Good Day LA on April 21 to discuss with Araksya Karapetyan the need for the Biden administration to recognize the Armenian Genocide.

"If we aren’t going to recognize a genocide that happened a century ago, what does that say about our willingness to stand up and confront a genocide happening today?" Schiff said.

However, Turkey’s foreign minister has warned the Biden administration that recognition would "harm" U.S.-Tukey ties.

"In terms of U.S-Turkish relations. They have been going south for a long time," Schiff added.

"As Turkey has increasingly become more autocratic, drifted away from the west and the United States and more towards Russia and Iran, so we shouldn’t be carrying their water on genocide under any circumstances but also if our relationship with Turkey depends on our complicity on genocide denial, it’s not much of a relationship."

Turkish Foreign Minister Mevlut Cavusoglu earlier this week insisted Turkey wasn’t concerned by any decision that Biden might make, but also suggested that such a move would be met with a harsh reaction.

"If the United States wants our relations to get worse, it’s up to them," he said in an interview with Turkey’s HaberTurk news channel.

The relationship between Biden and Erdogan is off to a chilly start. More than three months into his presidency, Biden has yet to speak with him.

Biden’s move comes months after a war occurred between Armenia and neighboring country Azerbaijan, who was supported by Turkey.

Thousands of people were killed when Azerbaijan began fighting on Sept. 2020 over the region of Nagorno-Karabakh (also known as Artsakh). Several people living in Artsakh were displaced and several historical and cultural Armenian structures, including churches were destroyed.

Several Armenian POWs are currently being held captive by Azerbaijan. The war ended in early November of 2020 but over a hundred POWs have still not returned to Armenia.

Since the war erupted, millions of people around the US and those in other countries have protested against Azerbaijan’s aggression towards Armenia, called for the formal recognition of Artsakh and demanded the US cut their ties with Turkey and sanction Turkey and Azerbaijan.