WILMINGTON, Del. - President-elect Joe Biden publicly received a second dose of the Pfizer-BioNTech COVID-19 vaccine, part of an ongoing effort to instill confidence in its effectiveness as the pandemic worsens.

Biden received his first shot on Dec. 21 at a hospital not far from his Delaware home. His wife, Jill Biden, was also vaccinated. The U.S. Centers for Disease Control and Prevention recommends the Pfizer shots be administered 21 days apart.

Vice President-elect Kamala Harris received the first dose of a vaccine developed by Moderna on Dec. 29 and will also receive the second dose publicly, the Biden-Harris transition team said. Biden and Harris’ vaccination schedules are being staggered as recommended by medical experts.

"They’ll both do it publicly to continue to instill confidence in the vaccine’s safety and efficacy," Jen Psaki, incoming White House press secretary, told reporters.

While receiving his first dose, Biden said he was doing so on camera "to demonstrate that people should be prepared when it’s available to take the vaccine. There’s nothing to worry about." 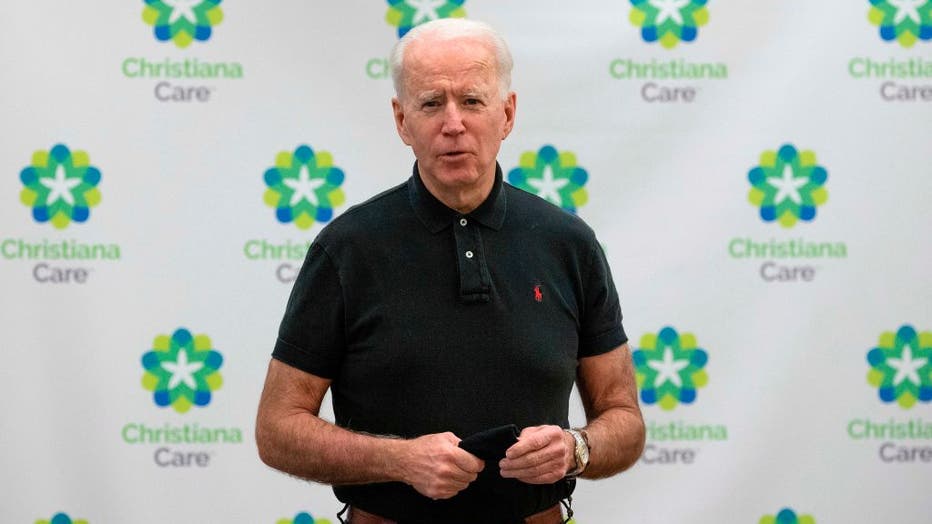 The U.S. is entering the second month of the biggest vaccination drive in history and working to ramp up vaccinations by opening football stadiums, major league ballparks, fairgrounds and convention centers to inoculate a larger and more diverse pool of people.

After a frustratingly slow rollout involving primarily health care workers and nursing home residents, states are moving on to the next phase before the first one is complete, making shots available to such groups as senior citizens, teachers, bus drivers, police officers and firefighters.

"Every shot in the arm is a step closer to ending this pandemic," Michigan Gov. Gretchen Whitmer said.

Since the onset of the outbreak, the death toll in the U.S. has climbed to nearly 375,000 people, data from Johns Hopkins University shows. More 22.4 million infections have been confirmed nationwide.

The number of COVID-19 cases was expected to soar this month after end-of-year holiday gatherings and a growing number of people contracting a new, more contagious variant.

Dr. Anthony Fauci received the first dose of the Moderna COVID-19 vaccine on Dec. 22, stating he hopes it serves as a symbol to Americans about the shot's safety and efficacy.

January is going to be "a tough one," said Dr. Margaret Harris, a spokeswoman for the World Health Organization. "This idea that seems to be ‘Ah, we’re all sick of it. We want to look at something else. Oh, this doesn’t apply to me' ... that’s got to go away. It really is all hands on deck."

Across the U.S., politicians and health officials have also complained over the past several days that too many shots were sitting unused on the shelves because of overly rigid adherence to the federal guidelines that put an estimated 24 million health care workers and nursing home residents at the front of the line.

As of Monday morning, about 6.7 million Americans had received their first shot of the vaccine, or 2% of the U.S. population, according to the U.S. Centers for Disease Control and Prevention. Experts say as much as 85% will have to be inoculated to achieve "herd immunity" and vanquish the outbreak.

Many states are responding by throwing open the line to others and ramping up the pace of vaccinations, in some cases offering them 24-7.

Arizona, with the highest COVID-19 diagnosis rate in the U.S., planned to dispense shots beginning Monday in a drive-thru, round-the-clock operation at the suburban Phoenix stadium that is home to the NFL’s Arizona Cardinals. Shots are being offered to people 75 and older, teachers, police and firefighters.

In Texas, Dallas County was scheduled to open a vaccine megasite on Monday on the grounds where the Texas State Fair is held. In Houston, nearly 4,000 people were vaccinated Saturday at Minute Maid Park, the home of baseball’s Houston Astros.

Detroit is turning its TCF convention center into a vaccination center starting Wednesday, with officials planning to schedule 20,000 appointments over the next month for people 75 and older. Police officers and bus drivers can also start to get vaccinated there at the end of the week.

"We are going to keep ramping up our vaccinations to the maximum extent the supply allows," Detroit Mayor Mike Duggan said.

In California, one of the deadliest hot spots in the U.S., authorities opened a drive-thru "vaccination superstation" Monday in a parking lot near the ballpark where the San Diego Padres play. The goal is to inoculate 5,000 health care workers a day. They will remain in their vehicles while they are given a shot, and will be asked to stay there for 15 minutes so they can watched for any reactions.

California hit another gloomy milestone, surpassing a death toll of 30,000. It took the state six months to record its first 10,000 deaths but barely a month to go from 20,000 to 30,000. Over the weekend, California reported a two-day record of 1,163 deaths. Hospitalizations also have exploded, and many medical centers are being pushed to the breaking point.

About 584,000 doses have been administered in California, or about 1.5% of the state’s population.