Proxima c appears to be at least 5.8 times as big as Earth.

CINCINNATI - In 2016, scientists announced the discovery of Proxima b, a potentially habitable planet orbiting Proxima Centauri — the closest star to the sun. Proxima b is the closest planet outside our solar system ever discovered.

Now, astronomers believe there could be evidence of a possible second planet orbiting around the star.

New research published Jan. 15 in the journal Science Advances notes that if it is indeed a planet, referred to as Proxima c in the paper, it is a candidate for being a “super-Earth.” This means its mass is greater than Earth’s, but substantially less than those of the ice giants Uranus and Neptune. 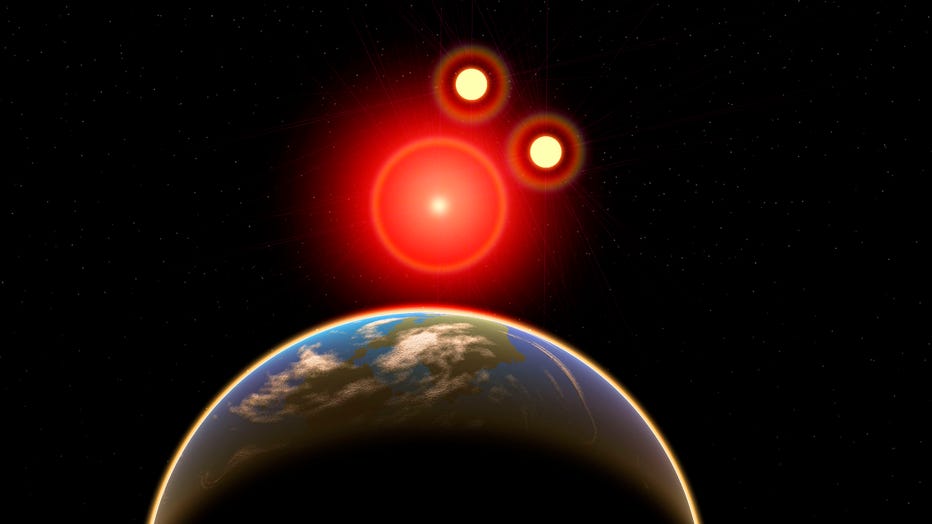 Proxima B, orbiting Proxima Centauri, is shown in a file illustration. (Photo by: Education Images/Universal Images Group via Getty Images)

It appears to be at least 5.8 times as big as Earth and orbits its star about once every five Earth years, researchers from Italy's National Institute for Astrophysics reported.

Proxima Centauri, where the celestial object orbits, is about 4.22 light-years from Earth. To put the distance into perspective, that’s about 25 trillion miles away, according to Space.

Because of its distance from Proxima Centauri, the planet is also too cold to have liquid water, which is recognized as one of the key prerequisites for life.

"Not habitable at all, I would say, since we predict with back of the envelope calculation its temperature to be around 40 Kelvin," Damasso told the network. "We have no clue on the actual planet structure and composition, although we can likely imagine that it has an extended atmosphere made mostly of [hydrogen] and [helium]."

The research team discovered Proxima c after analyzing more than 17 years of radial velocity data. Radial velocity is a technique that’s been used to discover the vast majority of exoplanets so far, according to the Planetary Society, a nonprofit space organization whose chief leader is Bill Nye.

The method relies on the fact that a star doesn’t remain completely stationary when it is being orbited by a planet. It moves and responds to the gravitational tug of the planet. When the star’s position moves, it affects the star’s color of light — which can be viewed from a distance.

The research team emphasized that additional data and research is needed to confirm the planet’s existence.

“A major role in confirming the existence of Proxima c will be played by space-based astrometry,” the researchers noted.

The team hopes to find more answers as part of the European Space Agency's Gaia mission in the future, which is working to chart a three-dimensional map of our galaxy.

"Given the encouraging results, even in the case of degraded precision, Gaia is expected to play a crucial role for the improved characterization of Proxima c,” researchers report.