"When we deal with people we usually deal with them with a negative situation," said Patrolman Andrew Beuschel. On Monday, he took FOX 29's Shawnette Wilson along for something new Riverton police are doing to change that.

"We decided that kids that are riding their bikes with their helmets on and we're going to stop them and give them a reward for that. We are also going to stop motorists who are obeying the law," he said.  It's called the "Positive Ticket” campaign. 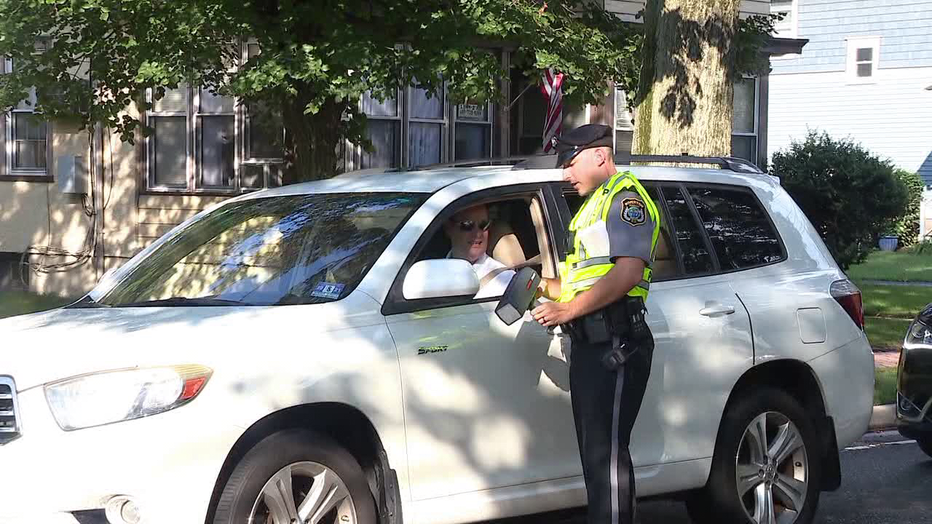 FOX 29 stopped at 7th and Main Street with Patrolman Beuschel and his handheld radar to see how it works.

"How you doing sir? Just want to say thank you for doing the speed limit here. It's 25 and you were doing 26. For that I'd like to give you a coupon for a free shortie hoagie at Wawa," said Patrolman Beuschel.  Next up are my two favorites. Daniel Terifay was riding passenger when police pulled over his dad Jack.

"I saw the police officer come out and I immediately checked on speedometer and I'm like dad you better be going 25 or lower," said Daniel. Luckily Jack didn't have to get a lesson in driving from his 16-year-old son who just got his permit three months ago. Instead they got a free food ticket too.

"Thank you very much. (How fast was your heart beating dear?) Going pretty well," said Jack.

9-year-old David Primavera rode off with a ticket for a free slice of pizza and soda.

"(It says you've been caught doing what?) The right thing. (Awesome) What was the right the right thing?) Wearing a helmet riding a bike," said David. He recently had an accident. He was wearing his helmet then too but suffered some bumps and bruises. His father says it could have been worse without it.

He's thankful for what Riverton police are doing.

"What they can do to get positive policing out in the town and reward kids and encourage them to wear their helmet. It's a big deal," said Dave.

"We're given a job that we have to enforce laws and people don't like that but there's also a lot of good things that are going on," said Patrolman Beuschel.

Local businesses and Wawa are donating food and desserts for the program.