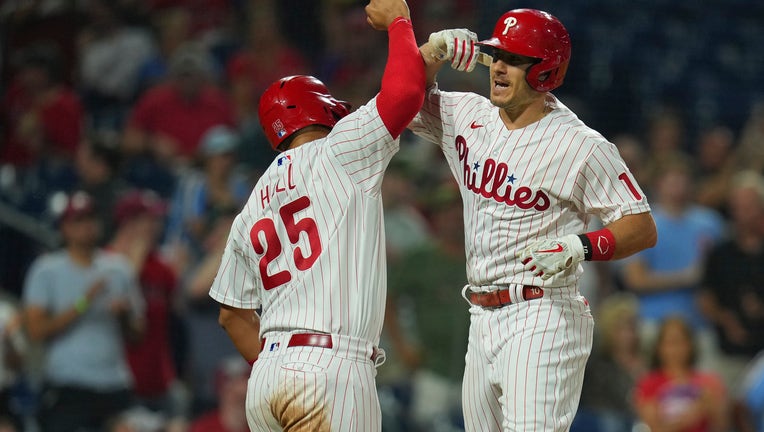 PHILADELPHIA, PA - JULY 05: J.T. Realmuto #10 of the Philadelphia Phillies celebrates with Darick Hall #25 after hitting a two run home run in the bottom of the fifth inning against the Washington Nationals at Citizens Bank Park on July 5, 2022 in Ph

J.T. Realmuto hit a two-run shot and a sacrifice fly as the Phillies won for the fourth time in five games. Alec Bohm had two hits and three RBIs, and Nick Castellanos drove in two runs.

Schwarber never got the memo that the calendar flipped from June to July. The NL Player of the Month picked up the slack for an injured Bryce Harper when he slugged 12 homers in June and blasted the Phillies into wild-card contention. Just days into July, Schwarber hasn’t slowed down -- and neither have the Phillies.

Schwarber opened the game against Paolo Espino (0-2) with his third leadoff homer this season and No. 16 for his career. His shot to center sent Victor Robles dangling over the fence in a futile bid to snag the ball.

Schwarber left no doubt in the third, drilling a solo shot into the second deck in right for his 18th career multihomer game. It was his fifth homer in eight games.

The Phillies hit the halfway point of their season — Tuesday marked Game No. 81 — in the thick of the playoff race. They got a nice boost from Cristopher Sánchez, who tossed two-hit ball over five shutout innings in his first start since he was called up from Triple-A Lehigh to start for the injured Ranger Suarez (back spasm). Sánchez (1-1) didn’t do anything fancy over 82 pitches but combined with three relievers to help the Phillies win the opener of the three-game set.

The Phillies scored two more in the fourth when homer-happy Darick Hall (his first three big league hits were homers) drilled a double off the padding above the 401 marker in center. Realmuto added a sacrifice fly and Bohm scored Hall on an RBI single for a 4-0 lead.

Hall singled in the fifth and scored on Realmuto’s seventh homer of the season.

The streaking Phillies are 22-9 since June 1 and 21-9 under interim manager Rob Thomson. He’s the second Phillies manager to ever start with that many wins through his first 30 games. They’ve done their damage with the bats, winning 18 of their last 20 when they score four-plus runs.

They reached that total alone with a five-run sixth highlighted by Bohm’s two-run single.

Phillies: Claimed LHP Sam Clay off waivers from the Nationals and optioned him to Triple-A Lehigh Valley. ... SS Didi Gregorius missed a third straight game with a sore left knee.

Harper said he will return from his broken left thumb and play this season. Harper didn’t put a timetable on his return. Harper was injured late last month when he was hit by a 97 mph pitch from San Diego Padres left-hander Blake Snell. The 2021 NL MVP had three pins put in his thumb during surgery that will be there for at least three more weeks.

"If I knew a specific date that I’d be back, I’d tell you," Harper said. "I just don’t think it’s fair to anybody. I’ll be back when I’m ready to go."