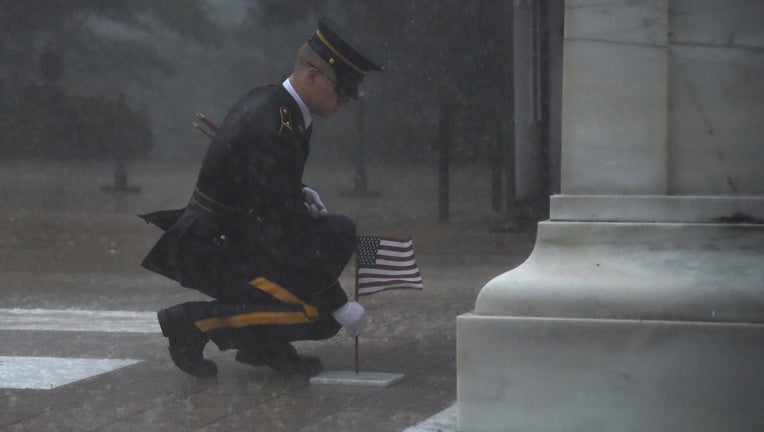 A severe thunderstorm Thursday failed to stop a sentinel from placing a flag at the Tomb of the Unknown Soldier. (3d U.S. Infantry Regiment)

(FOX NEWS) -- An “Old Guard” soldier who was photographed placing a small American flag at the Tomb of the Unknown Soldier during a severe thunderstorm is drawing notice ahead of Memorial Day.

The storm hit Thursday in D.C. as members of the 3d U.S. Infantry Regiment, better known as “The Old Guard,” were planting flags at each grave at the cemetery as they do each year at this time.

“During the storm, one of the most extraordinary displays of discipline and dedication to duty ever to be witnessed at Arlington National Cemetery was taking place at the Tomb of the Unknown Soldier,” the Old Guard’s Facebook page said in a post.

“With only a few watching from cover, a Tomb Sentinel approached the Unknowns with U.S. flags in hand. As thunder shook the ground and rains washed down without abandon, the Tomb Sentinel pierced through the elements with breath-taking precision.

“He knelt and placed the flags in honor of the Unknowns. For the select few who saw this moment, it was jaw-dropping. Humans have their limits, but The Old Guard has yet to meet theirs.”

Thousands of homes in the D.C. area lost power in the storm which also knocked down a significant number of trees, WUSA-TV reported.