In a slow, relentless advance, a catastrophic Hurricane Dorian kept pounding at the northern Bahamas early Monday, as one of the strongest Atlantic storms ever recorded left wrecked homes, shredded roofs, tumbled cars and toppled power poles in its wake.

The storm's top sustained winds decreased slightly to 165 mph (265 kph) as its westward movement slowed, crawling along Grand Bahama island Monday morning at 1 mph (1.6 kph) in what forecasters said would be a daylong assault. Earlier, Dorian churned over Abaco island with battering winds and surf during Sunday.

There was little information from the affected islands, though officials expected many residents to be left homeless. Most people went to shelters as the storm approached, with tourist hotels shutting down and residents boarded up their homes. 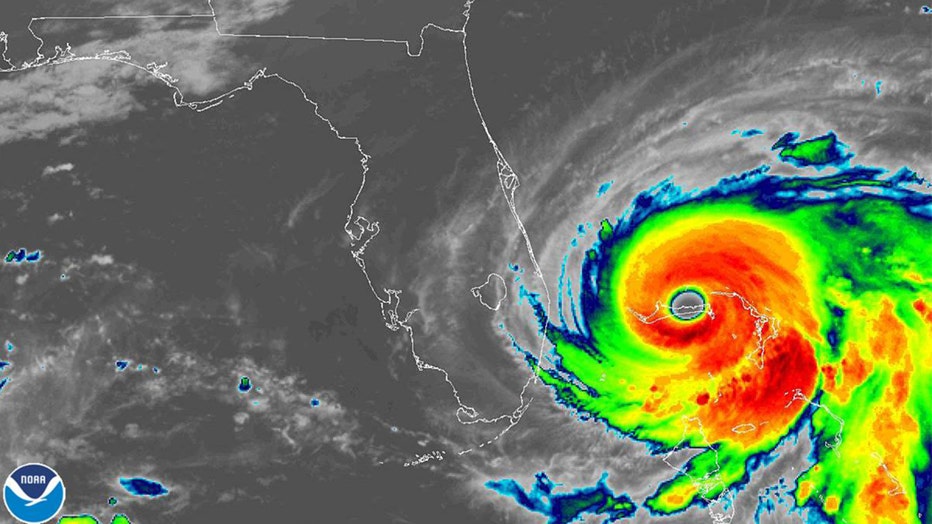 "It's devastating," Joy Jibrilu, director general of the Bahamas' Ministry of Tourism and Aviation, said Sunday afternoon. "There has been huge damage to property and infrastructure. Luckily, no loss of life reported."

On Sunday, Dorian's maximum sustained winds reached 185 mph (297 kph), with gusts up to 220 mph (354 kph), tying the record for the most powerful Atlantic hurricane to ever make landfall. That equaled the Labor Day hurricane of 1935, before storms were named. The only recorded storm that was more powerful was Hurricane Allen in 1980, with 190 mph (305 kph) winds, though it did not make landfall at that strength.

Forecasters said Dorian was most likely to begin pulling away from the Bahamas early Tuesday and curving to the northeast parallel to the U.S. Southeast seaboard. Still, the potent storm was expected to stay close to shore and hammer the coast with dangerous winds and heavy surf, while authorities cautioned that it could still make landfall.

According to a Monday morning advisory from the U.S. National Hurricane Center in Miami, Florida's east-central coast may see a "brief tornado" sometime between Monday afternoon and Monday night. 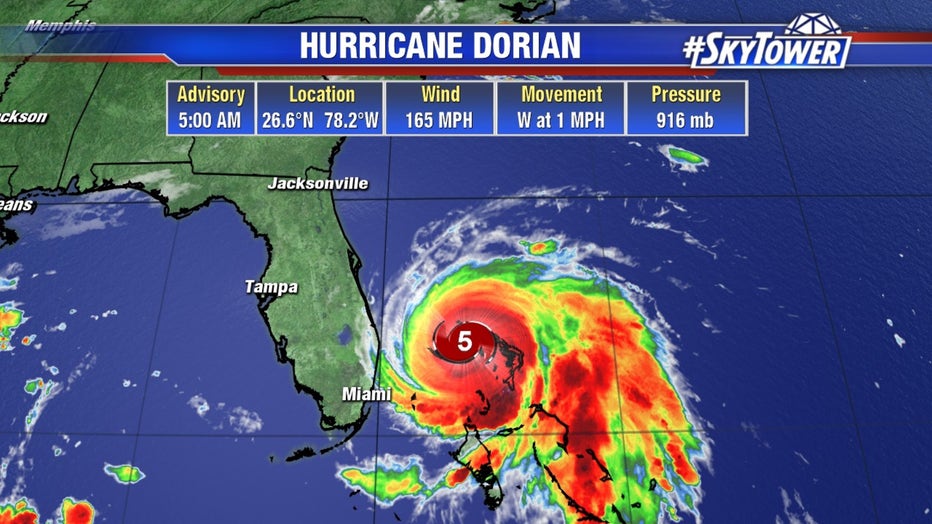 South Carolina Gov. Henry McMaster issued an order Sunday for the mandatory evacuation of his state's entire coast. The order, which covers about 830,000 people, was to take effect at noon Monday, at which point state troopers were to make all lanes on major coastal highways one-way heading inland.

"We can't make everybody happy, but we believe we can keep everyone alive," McMaster said.

Authorities in Florida ordered mandatory evacuations in some vulnerable coastal areas. North Carolina Gov. Roy Cooper warned his state that it could see heavy rain, winds and floods later in the week.

Dorian first came ashore Sunday at Elbow Cay in Abaco island at 12:40 p.m., then made a second landfall near Marsh Harbour at 2 p.m.

Video that Jibrilu and government spokesman Kevin Harris said was sent by Abaco residents showed homes missing parts of roofs, electric lines on the ground and smashed and overturned cars. One showed floodwaters rushing through the streets of an unidentified town at nearly the height of a car roof.

In some parts of Abaco, "you cannot tell the difference as to the beginning of the street versus where the ocean begins," Prime Minister Hubert Minnis said. According to the Nassau Guardian, he called it "probably the most sad and worst day of my life to address the Bahamian people."

Bahamas radio station ZNS Bahamas reported that a mother and child on Grand Bahama had called to say they were sheltering in a closet and seeking help from police.

Silbert Mills, owner of the Bahamas Christian Network, said trees and power lines were torn down in Abaco.

"The winds are howling like we've never, ever experienced before," said Mills, who was riding out the hurricane with his family in the concrete home he built 41 years ago on central Abaco.

Jack Pittard, a 76-year-old American who has visited the Bahamas for 40 years, also decided to stay put on Abaco for Dorian, which he said was his first hurricane. A short video from Pittard about 2:30 p.m. Sunday showed the wind shaking his home and ripping off the siding. 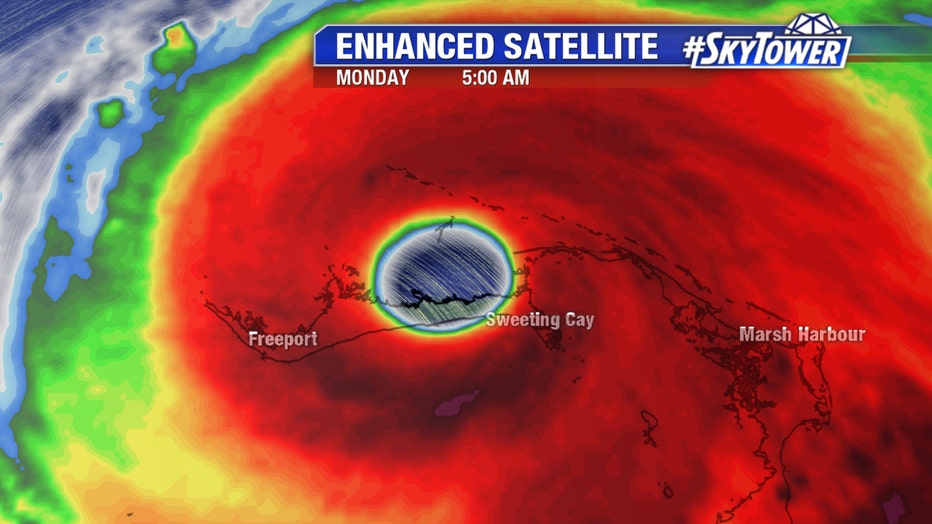 The Bahamas archipelago is no stranger to hurricanes. Homes are required to have metal reinforcements for roof beams to withstand winds into the upper limits of a Category 4 hurricane, and compliance is generally tight for those who can afford it. Risks are higher in poorer neighborhoods, with wooden homes in low-lying areas.

On Tuesday and Wednesday, Dorian is forecast to be 40 to 50 miles (64 to 80 kilometers) off Florida, with hurricane-force wind speeds extending about 35 miles (56 kilometers) to the west.

The U.S. National Hurricane Center issued a hurricane watch for Florida's East Coast from Deerfield Beach north to the Georgia state line. The same area was put under a storm surge watch. Lake Okeechobee was under a tropical storm watch.

Mandatory evacuation orders for low-lying and flood-prone areas and mobile homes were in effect starting either Sunday or Monday from Palm Beach County north to at least the Daytona Beach area, and some counties to the north issued voluntary evacuation notices. Weekend traffic was light in Florida despite those orders, unlike during the chaotic run-up to Hurricane Irma in 2017 when the unusually broad storm menaced the entire state.

Ken Graham, director of the hurricane center, urged people not to bet on safety just because the forecast track had the storm a bit offshore. With every new forecast, "we keep nudging (Dorian's track) a little bit to the left" - that is, is closer to the Florida coast, Graham said.

President Donald Trump already declared a state of emergency and was briefed about what he called a "monstrous" storm.

"We don't know where it's going to hit but we have an idea, probably a little bit different than the original course," Trump said. "But it can change its course again and it can go back more toward Florida." 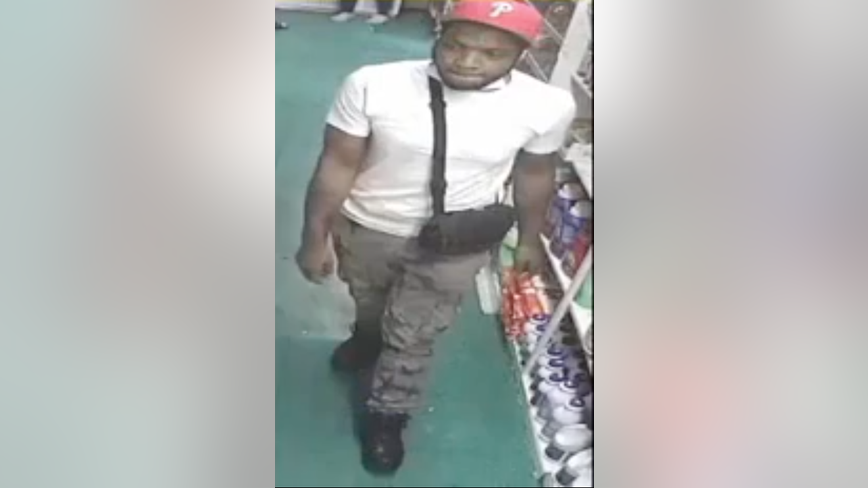 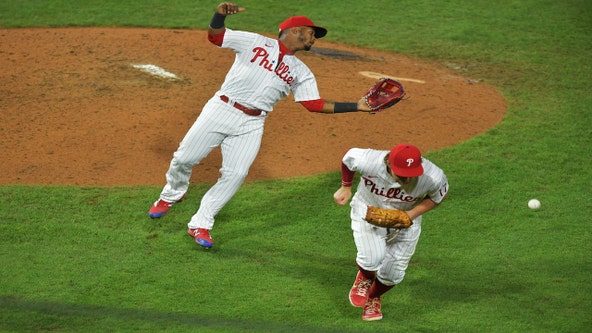 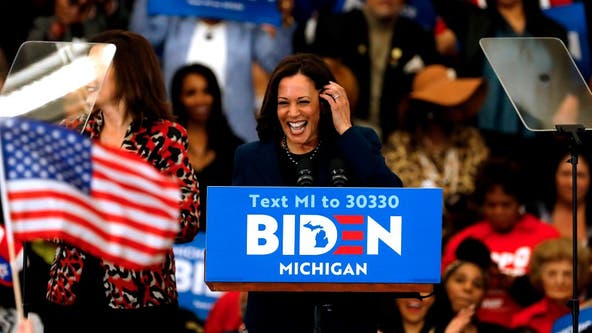