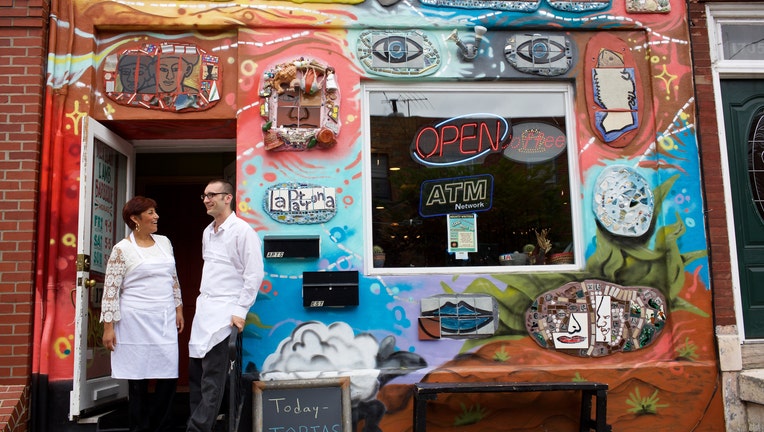 Outside their restaurant South Philly Barbocoa are chef Ben Miller and his wife and co-owner Cristina Martinez. (Photo by Deb Lindsey For The Washington Post via Getty Images).

PHILADELPHIA - A popular Mexican food restaurant is teaming up with local clothing boutiques to honor the “experience of immigrants” in Philadelphia.

Restaurant owner and chef, Cristina Martinez, was featured in popular Netflix show “Chef’s Table” in its fifth season which premiered on Sept. 28, 2018.

Martinez is a known activist and a local celebrity. She was featured in a segment about undocumented immigrants and their role in the food industry on the “Full Frontal with Samantha Bee” last year.

“Over the last few years, she has become one of the leading voices in the Philly food scene, and an advocate for immigrant rights who uses her status as an undocumented worker to highlight the problems with immigration laws in America,” Eater, a food-centric online publication, wrote of Martinez’s background.

The line of "Sanctuary City" apparel will be released on Friday, Aug. 30 at a pop-up shop inside of the restaurant.

Their capsule collection “pulls inspiration from propaganda and punk elements, blending them with iconic Philly landmarks,” according to UBIQ.

"I am proud to announce that we are joining forces with UBIQ on a capsule collection called Sanctuary City.  Philadelphia, known as the City of Brotherly Love, became a Sanctuary City in 2014," wrote Ps & Qs in a post about the collection. "This means Philadelphia doesn’t get involved with the national government’s immigration policies. Philadelphia upholds the American value of treating ALL people equally and fairly, regardless of where they're from."

According to the renowned restaurant, “100% of the profit will be donated to the People’s Suppers!”

The People’s Supper is a collaborative organization that advocates building “trust and connection among people of different identities and perspectives.”

A video supplemented the announcement of the collaborative collection details their restaurant’s background and the motivation for this effort.

“We talk about what we can do and how we can support one another, but most importantly, we remind everyone that all the food that ends up on the tables across the United States is being prepared by immigrants,” Cristina Martinez says in the video.

The retail pop-up shop will only be supplied a limited number of shirts and totes at the Italian Market location.