MEDIA, Pa. - County officials in southeast Pennsylvania met virtually on Sunday with the health department amid reports that the state's most populated counties are being given inadequate shipments of the COVID-19 vaccine.

Representatives from Bucks, Chester, Delaware and Montgomery counties joined the Sunday afternoon call where the state explained how the vaccines are being distributed. A source told FOX 29's Chris O'Connell that southeastern counties are being shorted more than 5% of what they should receive.

The meeting comes a week after a report from the Philadelphia Inquirer revealed that some of the largest and most crowded areas in Pennsylvania were near the bottom of the distribution list. Delaware County, for example, is fifth in population and 53rd in doses per capita. 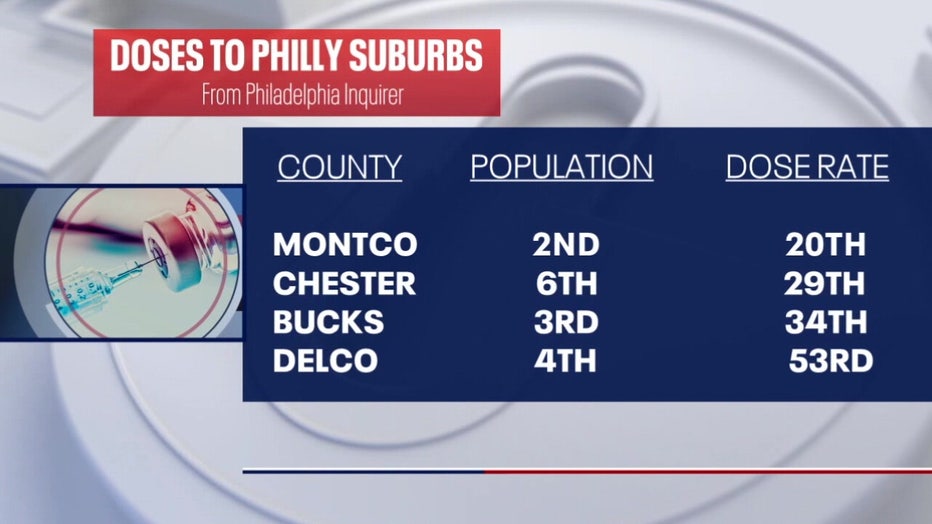 "It's not just that people want vaccines as quickly as possible, they just want to know when they can expect the vaccine," Maxwell said.

In an op-ed piece for the Philadelphia Inquirer, Delaware County representative Mike Zabel called Pennsylvania's distribution of doses "unnecessarily chaotic" and a "scavenger hunt." He said the plan to have residence scour the internet for vaccine appointments has resulted in inequitable distribution.

Representative Mike Zabel of Delaware County joined Good Day to talk about his opinion piece in the Philadelphia Inquirer where he criticized PA's vaccine distribution policy.

Zabel believes that mass vaccination sites, like the FEMA clinic at the Pennsylvania Convention Center, will boost access to shots for suburban residents. He also highlighted a bill put forth by lawmakers that would establish a state registry in which residents are contacted by the state to set up a vaccine appointment.

As a state, Pennsylvania has administered over 2M vaccines according to the Department of Health's website. More than half of those doses are patients who are partially covered. Nearly 940k Pennsylvania residents are fully vaccinated.