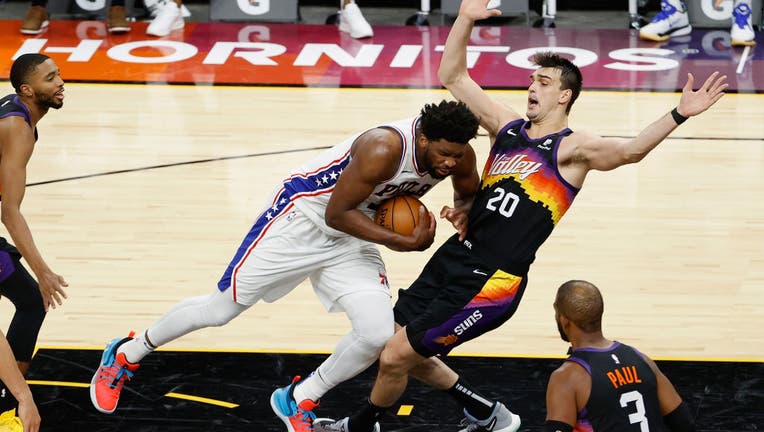 PHOENIX, ARIZONA - FEBRUARY 13: Joel Embiid #21 of the Philadelphia 76ers is fouled by Dario Saric #20 of the Phoenix Suns as he drives to the basket during the first half of the NBA game at Phoenix Suns Arena on February 13, 2021 in Phoenix, Arizona

The Suns have won eight of their past nine games and improved to 16-9. They got a big game from their bench against Philadelphia, especially from Dario Saric, who scored 15 points in his first game back after missing 10 straight.

Joel Embiid had 35 points on 12-of-23 shooting for the Sixers, who have lost two in a row but still hold the top spot in the Eastern Conference at 18-9. Ben Simmons and Tobias Harris both added 18 points.

The game was tied 53-all at halftime after a tight second quarter when there were nine lead changes and five ties. Booker took control in the third quarter, when he scored 16 points to give Phoenix an 86-81 lead going into the fourth.

Phoenix shot 61.5% from the field and got 49 points from the bench.

76ers: The Sixers fell to 7-7 on the road. … Embiid extended his streak of scoring at least 25 points to 11 games. That puts him alongside the Hall of Fame trio of Wilt Chamberlain, Allen Iverson and Charles Barkley as the only players in franchise history to accomplish the feat. He has scored at least 33 points in nine of those 11 contests. … Mike Scott returned to the lineup after missing 18 of the last 19 games with a knee injury. The forward was scoreless in 11 minutes … Shake Milton sat out with a left ankle injury.

Suns: The Suns are 9-4 on their home court. … Cameron Payne returned to action after missing 10 straight games. Payne, who had a foot injury, played 15 minutes and scored four points.

76ers: Wrap up their four-game road trip in Utah on Monday.

Suns: Continue their seven-game homestand against Orlando on Sunday.