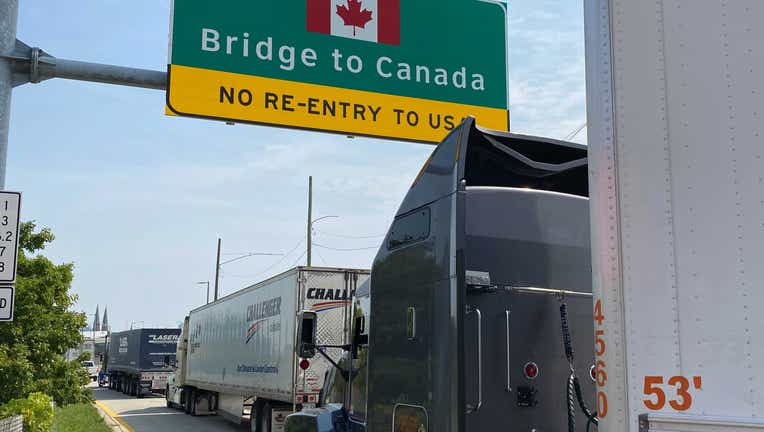 Trucks wait at the Canadian Border Crossing in Detroit on August 8.

DETROIT (FOX 2) - After more than a year-and-a-half, the United States and Canada border, the longest international border in the world, is set to reopen for U.S. citizens fully vaccinated against COVID-19.

Canadian officials announced on July 19 that it would ease restrictions to allow U.S. citizens to return for nonessential travel. The decision came as both countries were under intense scrutiny to reopen the order and before the delta variant took such a stronghold in the U.S.

Another problem that emerged just as the border was set to reopen was that Canadian border employees went on strike. About 9,000 employees with the Public Service Alliance of Canada and the Customs and Immigration Union implemented "work-to-rule" activities at Canadian airports, land borders, commercial shipping ports, and post offices that created heavy delays at access points around the country, including across the Ambassador Bridge between Detroit and Windsor.

But late Friday, after a final round of negotiations that lasted more than 36 hours, the Public Service Alliance of Canada and Customs and Immigration Union reached a tentative agreement with the Canada Border Services Agency late Friday, August 6, the organizations announced.

Before you return to visit loved ones or a vacation home you may have in the Great White North, there are several things you need to know.

Expect delays at the U.S.-Canada border over planned strike of Canadian customs officials

The headache at the border between the U.S. and Canada will get even worse Friday as customs officials upset about a lack of contract for the last three years say they will be actively working to slow movement through the border. Travel to vaccinated Americans begins on Monday.

Who can visit Canada?

Starting at midnight on Aug. 9, Canada is reopening for all non-essential travel but you have to be considered fully vaccinated before crossing the international border. That means you have to have received the Johnson and Johnson vaccine or both doses of the Pfizer-BioNTech and Moderna vaccines two weeks before you travel.

However, children under 12 who are accompanied by a fully vaccinated parent or guardian can travel to the country as well but must be tested on the first and eighth day of the trip.

Before you leave for Canada

Even if you're vaccinated against COVID-19, you'll still need to prove you're not carrying the virus with you when you travel.

The test has to be taken no more than 72 hours before you arrive in Canada. If you tested positive, it must have been 14 to 180 days since the positive test before you were eligible to enter Canada.

You must also be asymptomatic. If you have symptoms of Covid, even if you're vaccinated and have a negative test, you will not be allowed into the country.

What to bring to Canada

You have to submit your proof of vaccination and negative test to the country via ArriveCAN which is available in the app store or Google Play.

You'll have to provide the information from the app at the border when you arrive - so be sure to take a screenshot of your information, in case the app or email fails to load in Canada.

You should also bring your vaccination cards - whether they are physical or digital copies - and your negative test result.

Pay with your card. The Detroit-Windsor tunnel announced earlier this week it would no longer accept cash when it reopens.

When you arrive in Canada

You may have to wear a mask so be sure to keep a few in your bags or your car. You may be required to take another COVID-19 test when you arrive in Canada. The country says fully vaccinated travelers will not need to take a test unless they are randomly selected to do so.

Those random selections are required and must be done on day one of arrival. Failure to take the test could result in fines.

Even if you are fully vaccinated, you have to provide a quarantine plan in the ArriveCAN app and be prepared to quarantine. If while in the county, you test positive for COVID-19 or are exposed to someone who has tested positive, you will have to follow public health requirements, including quarantine or isolation.

Be prepared for backups

There are two ways in Detroit to get into Canada - the Ambassador Bridge and the Detroit-Windsor Tunnel - both will likely be backed up as you won't be the only one going.

While Canada has reopened its side of the border, the U.S. has not yet reopened for non-essential travel from Canadian residents. Don't worry, you'll be allowed to get home but it may be slow going there too.