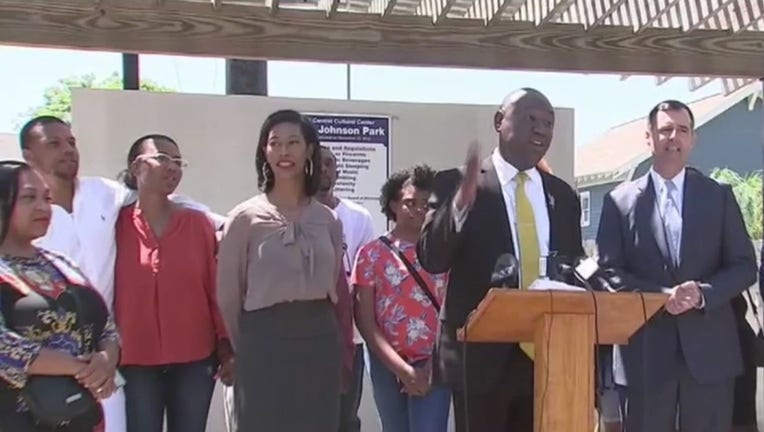 GALVESTON, Texas - Attorneys and family members are demanding the release of body camera video after a homeless man was arrested and paraded through the streets of Galveston on a rope by two horseback police officers. Civil rights attorney Ben Crump said if the police video of Donald Neely’s arrest is not released to the public in the next month, he’s planning a “march on Galveston” September 15.

According to the police report, Neely was arrested at the Park Board of Galveston Saturday evening August 3, charged with trespassing. The so-called staging area to which police led him by rope is about four blocks away.

“Don’t say no more; release the video!” Crump chanted from a podium alongside Neely’s family during the press conference Monday.

“This man did not deserve to be humiliated like this, you know—attached to a rope and dragged down the streets—and the video needs to come out, so we will know how the police felt they could treat somebody who was insignificant,” said Crump.

Park Board officials say their building was closed and locked on that Saturday evening when police charged Neely with misdemeanor trespassing. They say there was a warrant against Neely for trespassing there. Court records show the 43-year-old who was homeless has a long history of trespassing arrests.

His brother and sister spoke out on his behalf at the press conference.

“He just the sweetest thing on this earth,” said Taranette Neely. “He just mental. He just lost his way somewhere and just ran off, and there was nothing we could do about it. We reached out plenty of times to get him to come back home.”

“They dehumanized my brother on these streets,” said Andy Neely.

“The way they drug my brother down the streets just really tore my heart,” said Taranette. “I mean I was just in shock.”

“Why would they do that after several encounters with him?” asked Andy. “I think it was just to humiliate him.”

Crump says the march on Galveston will send a clear message.

“We will bring hundreds of people from all across America to march on galveston demanding transparency,” said Crump.

FOX 26 submitted a formal request for the release of the body cam video on August 6, but a City of Galveston spokeswoman said Monday the footage won’t be released until a thorough investigation is conducted. She said it’s unclear whether that will fall within the timeframe of September 15th.