Thousands of people attended a music festival in Liverpool, England, on May 2, which was held as a pilot examining the risks of transmission of COVID-19 at public gatherings. Credit - Liverpool City Council via Storyful

LIVERPOOL, England - Thousands of people shed their masks and social distancing protocol to attend a one-day music festival in England as part of a research project to test whether such events spread the coronavirus.

Liverpool hosted the outdoor music event, which welcomed about 5,000 people who were required to show proof of a negative COVID-19 test upon entry with no sign of symptoms. It was held at the city’s Sefton Park with tickets only offered to local residents.

The data is being used by the U.K. government's Events Research Programme to better understand the impact of crowds on the spread of COVID-19. Other pilot events included a business conference at ACC Liverpool, FA Cup semi-final at Wembley Stadium, as well as the upcoming BRIT Awards in London.

"The Sefton Park pilot is a vital, science-led event which will help open up the live music industry in a safe and secure way," Festival Republic, which hosted the pilot project, stated about the event. 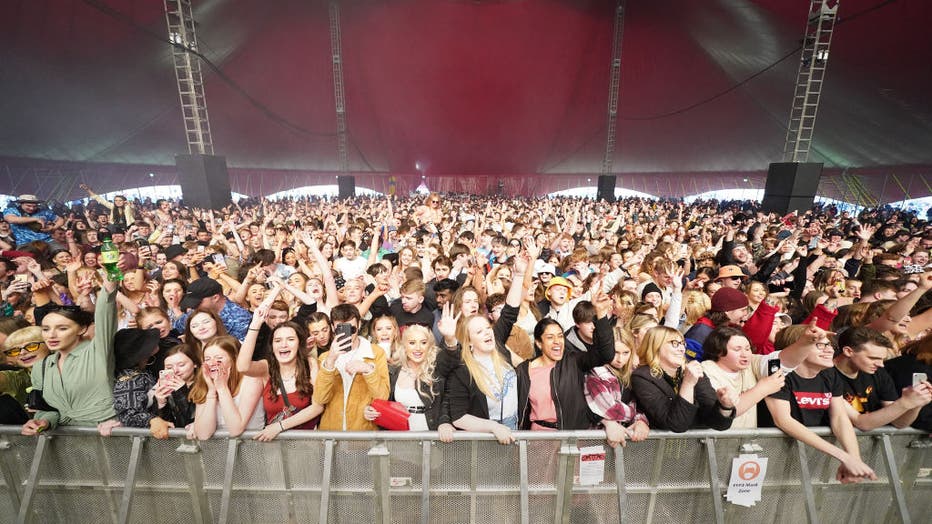 People watch Zuzu perform on stage at a music festival in Sefton Park in Liverpool as part of the national Events Research Programme (ERP) on May 2, 2021. (Photo by Danny Lawson/PA Images via Getty Images)

The outdoor concert was headlined by Blossoms with other performances by The Lathums and Zuzu. Ticketholders were required to take a lateral flow COVID-19 test at one of the community testing sites 24 hours before the event and show the negative result to enter.

Those attending were also asked to take an at-home PCR test on the day of the event, as well as five days afterward. The event organizers said the at-home tests are "non-mandatory but important part of the event research data requested by the scientists."

"The energy was just unbelievable," Zuzu said following the performance. "I got emotional. I cried on the way out."

Britain has recorded more than 127,000 COVID-19 deaths, the highest toll in Europe. The country’s swift vaccination campaign has given almost two-thirds of adults at least one shot, and the government is gradually lifting the restrictions on social and economic life that were in place over much of the last 14 months.

Most shops and services are open, but indoor drinking, dining and entertainment will not resume before May 17 at the earliest. Some social distancing rules will be in place until at least June 21.

"This event is not about pushing vaccines or passports, we do not want to limit attendance to our events in any way. Working with the government we want to create a universal blueprint for reopening and demonstrate we can do it safely," Festival Republic Managing Director Melvin Benn said in a statement.

Benn added that the Liverpool music festival was the first step in getting festivals "back on track this year" in a safe way.

The government’s pilot events were selected based on settings that cover a range of criteria, including different audience capacities, outdoor and indoor venues and different layouts. Last week, 3,000 people were allowed to attend a nightclub test event, also in Liverpool, without restrictions. The attendees were also tested before and after the pilot event, while researchers studied the air quality and movement in the venue.

Organizers of a Barcelona concert last month attended by 4,500 mask-wearing fans who had been screened for the virus say the event produced no significant outbreaks.

Meanwhile, in the U.S., Coachella and Stagecoach music festivals have been postponed again, according to reports. But the Electric Daisy Carnival, commonly known as EDC and held in Orlando, is scheduled to return for three days in November.