HARRISBURG - Thousands attended a protest Monday in Harrisburg to rally against Pennsylvania official's decision to keep businesses shuttered and statewide restrictions in place.

"We have not done any business in the past six weeks. We need to open our business now," small business owner Linda Smith said.

The constant blaring of horns led up to the noon Reopen PA rally. The organizers argue the statewide shutdown is taking a toll on livelihoods in the state.

"It just broke my heart to speak with my barber who was shut down by the cops now he can’t make his livelihood," organizer Joel Underwood said.
Some protesters wore protective masks, but many did not, and social distancing largely took a backseat in the crowd of several thousand. 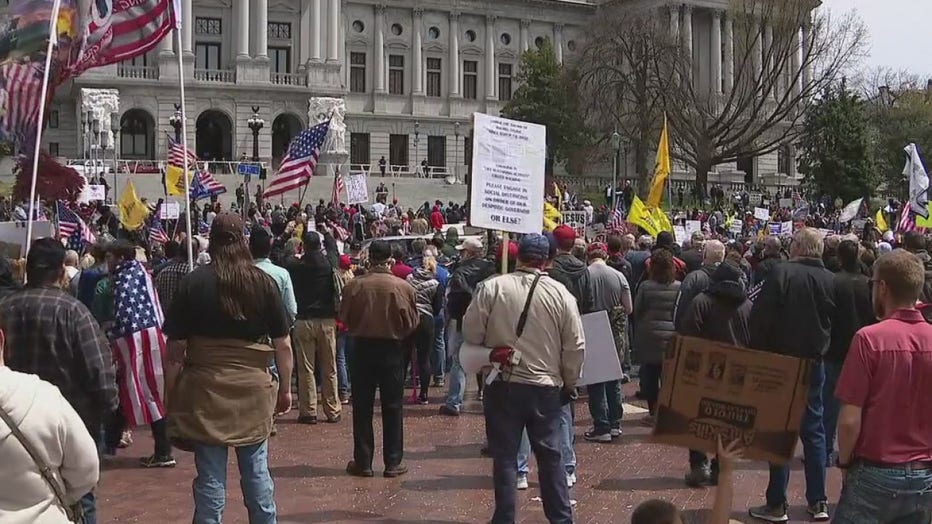 Thousands attended a rally in Harrisburg on Monday as businesses remain closed in Pennsylvania and a stay-at-home order is in effect.

Gov. Tom Wolf on Monday set May 8 as the target launch date for a gradual easing of some restrictions imposed because of the pandemic, saying Pennsylvania had made sufficient progress against COVID-19 to warrant a gradual reopening of the economy.

All 12.8 million Pennsylvanians will have to stay home at least through that date, said Wolf, extending his existing stay-at-home order by another eight days. But he suggested it might then be lifted in areas of the state where the new coronavirus — which has killed more than 1,200 Pennsylvania residents — does not pose as great of a threat.

Wolf expands stay-at-home order to all of Pennsylvania

GOP lawmakers have been pressing Wolf to ease his economic shutdown, more business owners are fearing bankruptcy and at least 1.4 million Pennsylvania residents have been thrown out of work during a pandemic that has killed more than 700 statewide.

But Wolf, while acknowledging catastrophic damage to the economy, said adequate testing capabilities are not yet in place in Pennsylvania or anywhere else to start trying to return to normal.

“I think that we ought to stay the course right now,” the Democrat told reporters on a telephone conference call. “It is hard, it is devastating the economy, no question about it, but letting this virus overwhelm the health care system and the ability of Pennsylvanians to resist it would be even worse for the economy."

He suggested that many people still do not feel safe going to work or going out to patronize businesses, and that reopening is not as easy as it sounds.

“There’s no reason to take our feet off the brakes at this point,” Wolf said. “We need to get through this phase as quickly as possible and keep Pennsylvanians safe, and so that’s what I’m focused on.”

Asked about plans for a protest at the Capitol on Monday, Wolf said he had not heard about it. Wolf said it would be “unfortunate” if it came off, suggesting that protesters could expose themselves to the virus by gathering in a group.

“The harm they’re doing is basically to themselves and to each other,” Wolf said.