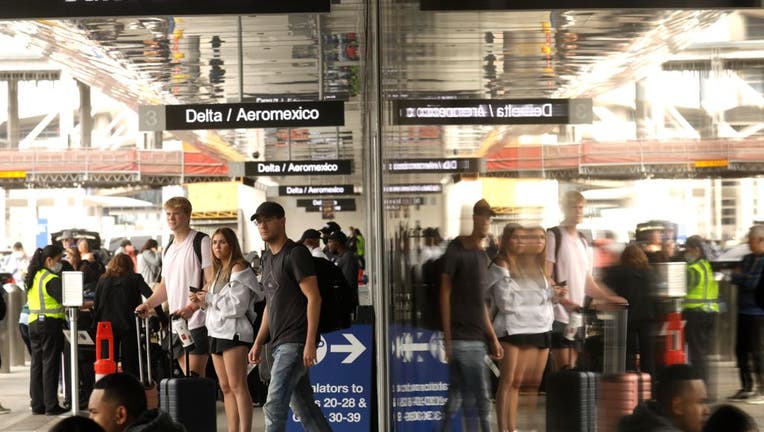 NEW YORK (AP) - Hundreds of flights worldwide were canceled by Sunday evening, adding to the mounting number of scrubbed flights during the busy Memorial Day holiday weekend in the U.S.

About 1,460 flights had been canceled as of 7 p.m. EDT Sunday, according to flight tracking website FlightAware. That followed more than 2,300 cancellations Friday and another 1,500 on Saturday.

Nearly 450 of Sunday's cancellations involved aircraft scheduled to fly to or from U.S. cities.

Delta Air Lines canceled the most flights among major U.S. airlines, with more than 250 flights, or 9% of its operations, eliminated Saturday. One hundred and sixty Delta flights were canceled by Sunday evening, according to FlightAware.

Saturday’s cancellations were due to bad weather and "air traffic control actions," Atlanta-based Delta said in an email to The Associated Press, noting it’s trying to cancel flights at least 24 hours in advance of the Memorial Day weekend.

Delta announced on its website on Thursday that from July 1 to Aug. 7, it would reduce service by about 100 daily departures, primarily in parts of the U.S. and Latin America that Delta frequently serves.

"More than any time in our history, the various factors currently impacting our operation — weather and air traffic control, vendor staffing, increased COVID case rates contributing to higher-than-planned unscheduled absences in some work groups — are resulting in an operation that isn’t consistently up to the standards Delta has set for the industry in recent years," Delta’s Chief Customer Experience Officer Allison Ausband said in a post.

Many forecasters believe the number of travelers will match or even surpass pre-pandemic levels. However, airlines have thousands fewer employees than they did in 2019, and that has, at times, contributed to widespread flight cancellations.

Rideshare driver travels to all 50 states to try local food, learn about America

Kreskin Torres, a 33-year-old Army veteran, kicked off his adventure in Los Angeles, California, and since then, he has visited 49 states. Soon, he will fly to Honolulu, Hawaii, and rent a car to achieve his 50-state milestone.

People who are only now booking travel for the summer are experiencing the sticker shock.

Domestic airline fares for summer are averaging more than $400 for a round trip, 24% higher than this time in 2019, before the pandemic, and a robust 45% higher than a year ago, according to travel-data firm Hopper.