WASHINGTON - President Trump on Friday said he would direct the Treasury Department to review the tax-exempt statuses of some universities and threatened to revoke federal funding for the schools.

"Too many Universities and School Systems are about Radical Left Indoctrination, not Education," he tweeted. "Therefore, I am telling the Treasury Department to re-examine their Tax-Exempt Status and/or Funding, which will be taken away if this Propaganda or Act Against Public Policy continues. Our children must be Educated, not Indoctrinated!"

Trump did not name specific institutions whose status he wants Treasury to review.

Most public and private universities and colleges in the U.S. are not required to pay the federal corporate income tax because they're classified as 501(c)(3) organizations. Generally, the schools are also free from the state corporate income tax, as well as state and local property taxes, according to a 2013 paper published by Henry Hansmann, a professor at Yale University's law school.

The IRS, which operates under the Treasury Department's umbrella, would be responsible for reviewing the tax-exempt statuses of universities. However, federal law prohibits the agency from targeting groups for "regulatory scrutiny based on their ideological beliefs." 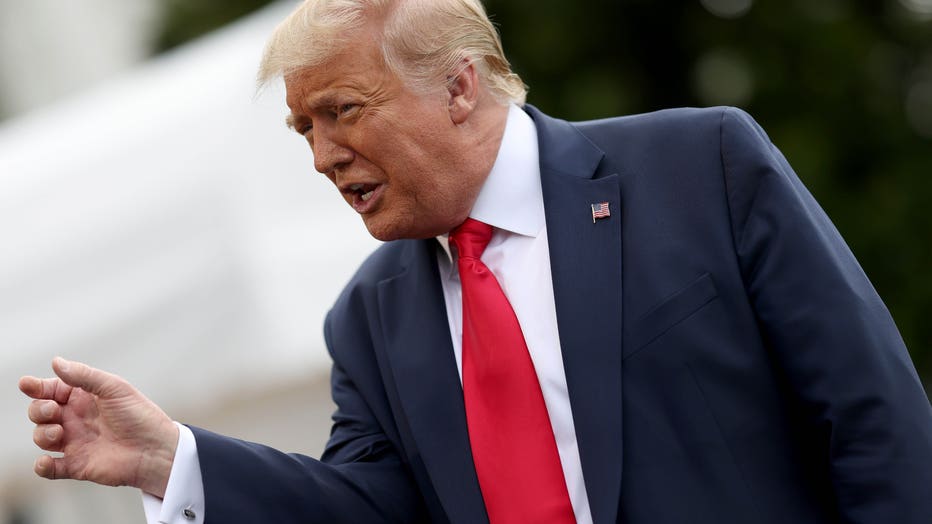 President Donald Trump speaks to reporters before departing from the White House on Marine One, on July 10, 2020 in Washington. D.C. (Photo by Win McNamee/Getty Images)

Trump has unleashed a torrent of attacks against the nation's universities and schools in recent days. During his Fourth of July speech at the Mount Rushmore National Memorial in South Dakota, Trump railed against schools that are teaching kids to "hate our country" by teaching them "far-left fascism that demands absolute allegiance."

He blamed schools for the civil unrest around the country that has seen protesters remove statues honoring leaders of the Confederacy and other historical figures who owned slaves, including George Washington.

“Against every law of society and nature, our children are taught in school to hate their own country and to believe that the men and women who built it were not heroes but that were villains,” he said.

It's not the first time that Trump has gone after universities for the taxes they pay: The massive $1.5 trillion tax overhaul that he signed into law three years ago was funded in part by imposing a new levy on college endowments. The provision affected about 30 wealthy schools, including Stanford and Harvard.