WASHINGTON - During an address to the nation Wednesday, President Donald Trump indicated he would not respond militarily after no one was harmed in Iran's ballistic missile strike on two Iraqi bases housing U.S. troops.

“As long as I am President of the United States, Iran will never be allowed to have a nuclear weapon,” Trump stated at the beginning of his address, adding that Iran appears to be “standing down.”

Speaking from the foyer of the White House, Trump seemed intent on deescalating the crisis, which reached a new height after he authorized the targeted killing last week of Gen. Qassem Soleimani, the head of Iran’s elite Quds Force. 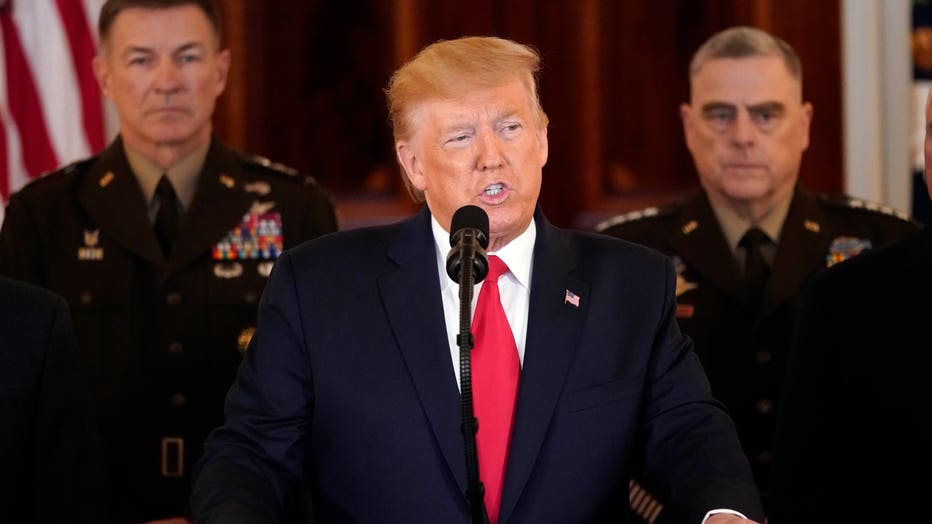 Iran retaliated overnight with its most direct assault on America since the 1979 seizing of the U.S. Embassy in Tehran, firing more than a dozen missiles from its territory at the U.S. installations.

Trump called for new nuclear negotiations to replace the 2015 nuclear deal from which he withdrew the U.S. He also announced he would ask NATO to become "much more involved in the Middle East process.”

Trump credited an early warning system “that worked very well" for the fact that no Americans or Iraqis were killed. He added that Americans should be “extremely grateful and happy” with the outcome.

Trump, facing one of the greatest tests of his presidency, said Wednesday that the U.S. response would be to put in place new economic sanctions “until Iran changes its behavior."

The strikes had pushed Tehran and Washington dangerously close to all-out conflict and put the world's attention on Trump as he weighed whether to respond with more military force. The Republican president delivered his remarks surrounded by his national security advisers in the foyer of the White House.

It came after a late-night tweet in which he insisted “All is well!” after the strikes.

Iran’s Supreme Leader Ayatollah Ali Khamenei, speaking on Wednesday, said the strike was not necessarily the totality of Iran's response.

“Last night they received a slap,” Khamenei said. “These military actions are not sufficient (for revenge). What is important is that the corrupt presence of America in this region comes to an end.”

Iran, for days, had promised to respond forcefully to Soleimani's killing, but its limited strike on two bases — one in the northern Iraqi city in Irbil and the other at Ain al-Asad in western Iraq — appeared to signal that it was also uninterested in a wider clash with the U.S. Foreign Minister Mohammad Javad Zarif tweeted that the country had “concluded proportionate measures in self-defense."

Speaking Wednesday, Trump said the United States is “ready to embrace peace with all who seek it.”

Soleimani's death last week in an American drone strike in Baghdad prompted angry calls for vengeance and drew massive crowds of Iranians to the streets to mourn him. Khamenei himself wept at the funeral in a sign of his bond with the commander.

The Iranians fired a total of 15 missiles in the latest strikes, two U.S. officials said. Ten hit the Ain al-Asad air base in Iraq’s western Anbar province and one targeted a base in Irbil in Iraq’s semi-autonomous Kurdish region. Four failed, said the officials, who were not authorized to speak publicly about a military operation.

Trump, who is seeking reelection at the end of the year, campaigned for president on a promise to keep the United States from engaging in “endless war.”

Adding to the chaos, a Ukrainian airplane with 176 people crashed after takeoff just outside Tehran on Wednesday morning, killing all on board, Iranian state TV and Ukrainian officials said. Mechanical issues were suspected.

The Boeing 737-800 had taken off from Imam Khomeini International Airport, bound for the Ukrainian capital, Kyiv. The plane carried 167 passengers and nine crew members. Ukraine's foreign minister, Vadym Prystaiko, said there were 82 Iranians, 63 Canadians and 11 Ukrainians on board — the Ukrainian nationals included two passengers and the nine crew.

The rest were Swedish, Afghan, German and British nationals.

RELATED: Ukrainian airplane crashes near Iran's capital, killing all 176 on board

The U.S. Federation Aviation Administration earlier warned of a "potential for miscalculation or mis-identification" for civilian aircraft in the Persian Gulf. The agency barred U.S. pilots and carriers from flying over areas of Iraqi, Iranian and some Persian Gulf airspace.

A magnitude 4.9 earthquake also hit Iran early Wednesday in the southwestern part of the country near the Bushehr nuclear plant, according to the U.S. Geological Survey.