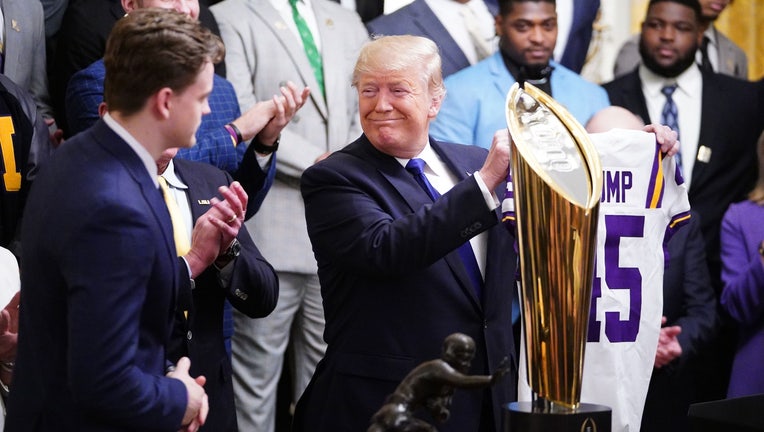 Tigers Quarterback Joe Burrow gives US President Donald Trump a team jersey as they take part in an event honoring the 2019 College Football National Champions, the Louisiana State University Tigers, in the East Room of the White House in Washington,

President Trump appeared to support college football players who wish to play in the fall despite the ongoing coronavirus pandemic.

“The student-athletes have been working too hard for their season to be cancelled #WeWantToPlay,” Trump tweeted.

"I spoke to the president in the Oval Office about that. He would very much like to see college football safely resume their sport... a lot of these college athletes work their whole lives to get four years, or sometimes if they're redshirted an extra year, they work their whole lives for this moment and he'd like to see them have a chance to live out their dreams," she said.

Trump’s tweet came as eyes turned to Big Ten Conference as reports indicated Monday morning that presidents from the 14 schools voted to cancel the season by a vote of 12-2. The Detroit Press reported that vote took place with Nebraska and Iowa the only two schools to vote in support of playing football in the fall.

Sports radio personality Dan Patrick reported too that the Big Ten and Pac-12 are planning to cancel their football seasons.

“The Big 10 and the Pac-12 will cancel their football seasons [Tuesday],” Patrick said. “The ACC and the Big 12 are on the fence. The SEC is trying to get a delay to get teams to join them. The SEC is looking at exclusive TV contracts.”

Patrick said the SEC could look to bring in other schools.

“So the SEC might go alone and bring in other schools?” he said. “That’s the latest, they are trying to buy time… to see if the ACC or the Big 12 will go along with them.”

However, Yahoo Sports reported that a Big Ten spokesman said no vote was held by school officials, continuing the confusion in the day.

Lawrence appeared to be the leader in the support to play college football. He and Ohio State quarterback Justin Fields were among those who tweeted a statement under the logo of the Power 5 conferences – the ACC, Big 12, Big Ten, SEC, and Pac-12 – with the hashtags #WeAreUnited and #WeWantToPlay. Their statement included a list of demands to make sure the season is safe for all of the student-athletes who decide they want to step onto the football field.”

“We all want to play football this season,” the message read.  “Establish universal mandated health & safety procedures and protocols to protect college-athletes against COVID-19 among all conferences throughout the NCAA. Give players the opportunity to opt out and respect their decision. Guarantee eligibility whether a player chooses to play the season or not. Use our voices to establish open communication and trust between players and officials; ultimately create a College Football Players Association [with] representatives of the players of all Power 5 conferences.” 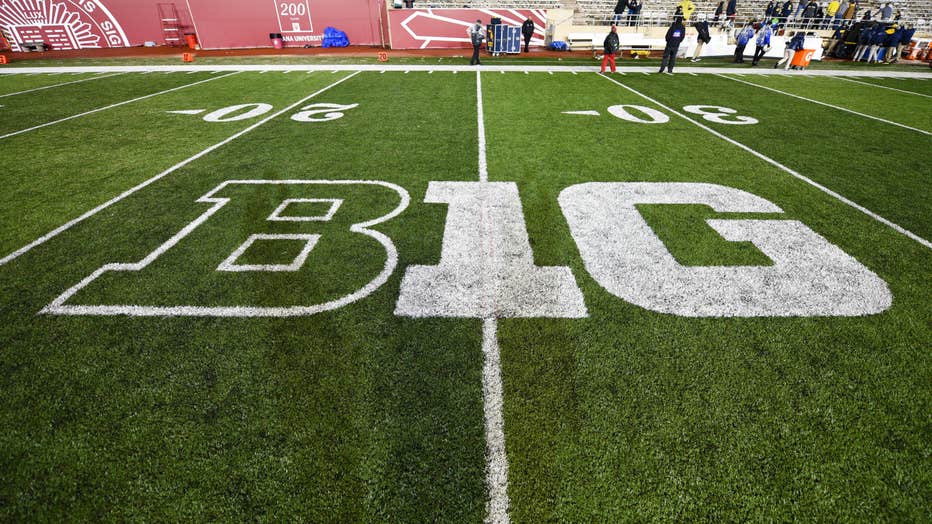 BLOOMINGTON, IN - NOVEMBER 23: The Big Ten Conference logo at Memorial Stadium following a college football game between the Michigan Wolverines and Indiana Hoosiers on November 23, 2019, at Memorial Stadium in Bloomington, IN.(Photo by James Black/I

Lawrence also tweeted separate messages about the upcoming season and why he thinks student-athletes should be able to get to play.

“People are at just as much, if not more risk, if we don’t play. Players will all be sent home to their own communities where social distancing is highly unlikely and medical care and expenses will be placed on the families if they were to contract covid19,” the star quarterback wrote.

“Not to mention the players coming from situations that are not good for them/ their future and having to go back to that. Football is a safe haven for so many people. We are more likely to get the virus in everyday life than playing football. Having a season also incentivizes –

“Players being safe and taking all of the right precautions to try to avoid contracting covid because the season/ teammates safety is on the line. Without the season, as we’ve seen already, people will not social distance or wear masks and take the proper precautions.”

It’s unclear what the Power 5 conferences are thinking in regard to the 2020 season. Each conference has already created an in-conference schedule for each team to limit travel around the country. The ACC has even included Notre Dame in the scheduling process.

Sources told ESPN the commissioners met on Sunday to discuss the possibility of not playing football in the fall. However, no decisions were ultimately made. Big Ten presidents are reportedly ready to nix college football and wanted to see whether other conferences were feeling the same way.

The Mid-American Conference was the first Football Bowl Subdivision conference to push fall sports to the spring.

“No one has talked about a plan if the season is canceled,” West Virginia athletic director Shane Lyons, who is the chair of the Football Oversight Committee, told ESPN. “If it's canceled, we need to be able to give clear direction at that time, as opposed to saying, 'We don't know.’”