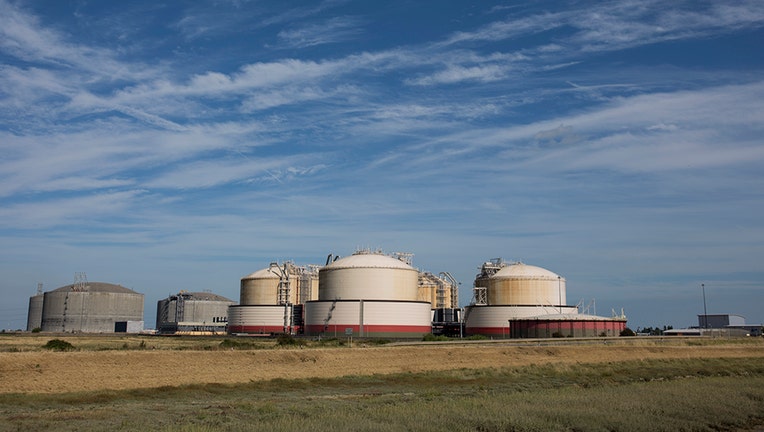 FILE: A general view of the Liquefied Natural Gas (LNG) importation terminal on the Isle of Grain on August 31, 2016 in Isle of Grain, England. (Photo by Dan Kitwood/Getty Images)

WASHINGTON - The U.S. Energy Department rebranded liquid natural gas exports as “molecules of U.S. freedom” and “freedom gas” in an announcement on Tuesday about authorizing LNG exports from Freeport LNG.

The DOE approved additional exports of domestically produced natural gas from the Freeport LNG Terminal located on Quintana Island, Texas, according to a press release. The announcement was made at the Tenth Clean Energy Ministerial in Vancouver, Canada, where the DOE is “highlighting its efforts to advance clean energy,” the release said.

“With the U.S. in another year of record-setting natural gas production, I am pleased that the Department of Energy is doing what it can to promote an efficient regulatory system that allows for molecules of U.S. freedom to be exported to the world,” said Assistant Secretary for Fossil Energy Steven Winberg, who signed the export order and was also in attendance at the Clean Energy Ministerial.

The rebranding of the gas exports also included the term “freedom gas.”

“Increasing export capacity from the Freeport LNG project is critical to spreading freedom gas throughout the world by giving America’s allies a diverse and affordable source of clean energy,” said U.S. Under Secretary of Energy Mark W. Menezes, who highlighted the approval at the Clean Energy Ministerial. “There’s no doubt today’s announcement furthers this Administration’s commitment to promoting energy security and diversity worldwide.”

The Freeport LNG facility's expansion is estimated to support up to 3,000 engineering and construction jobs, as well as hundreds of indirect jobs associated with the project, according to the DOE.

The DOE's announcement to authorize more LNG exports comes amidst the efforts of President Donald Trump and his administration to dismantle and roll back former President Barrack Obama's legislation to rein in coal, oil and and gas emissions. Warnings have grown from Trump's own administration and others about the devastating impact of climate change on the U.S. economy as well as the planet at large.

Trump’s position has been that efforts to combat emissions that cause climate change have hurt the U.S. economy. He has dismissed his administration’s warnings about the impact of climate change, including a forecast released last year that it could lead to severe economic losses. The climate report, released by Trump's own administration, warned that natural disasters are worsening in the U.S. because of global warming.

“The potential for losses in some sectors could reach hundreds of billions of dollars per year by the end of this century,” the report said. It added that if emissions of heat-trapping gases continue at current levels, labor costs in outdoor industries during heat waves could cost $155 billion in lost wages per year by 2090.

Hurricanes Harvey, Maria and Irma in 2017 alone caused at least $265 billion in damage, according to the National Oceanic Atmospheric Administration.

Announcing the U.S. withdrawal from the Paris global climate accord in June 2017, Trump said, “The Paris Climate Accord is simply the latest example of Washington entering into an agreement that disadvantages the United States to the exclusive benefit of other countries, leaving American workers — who I love — and taxpayers to absorb the cost in terms of lost jobs, lower wages, shuttered factories, and vastly diminished economic production.”

An email obtained by The Associated Press under the Freedom of Information Act shows the administration withdrew from the Paris agreement with no clear climate policy in place.

“All, the purpose of this meeting is to explore whether, post Paris, we need to develop, or simply piece together from what already exists, a policy proposal that can be characterized as the “Trump climate policy,” Michael Catanzaro, a former oil and gas lobbyist then serving as Trump’s energy and environment consultant, wrote to White House and Environmental Protection Agency officials days after the president’s announcement.

At the time, the EPA did not respond to requests for details on the meeting, or on any subsequent Trump climate policy.