Students say they want to see more action from the University of Delaware and are questioning why it took them four days to acknowledge the arrest of fellow student 20-year-old Brandon Freyre.

NEWARK, Del. - Protests erupted for a second day at the University of Delaware after a former student was arrested in an attack on his ex-girlfriend.

"This is one instance but it speaks volumes to the culture. The culture must change," Gigi Quatrone said.

Students say they want to see more action from the University of Delaware and are questioning why it took them four days to acknowledge the arrest of 20-year-old Brandon Freyre.

Newark police say on Thursday in an apartment on East Main Street, off-campus, he got in a fight with the woman and it escalated.

According to police, Freyre hit her with various objects, sprayed her in the eyes with spray paint, threatened to kill her, strangled her to the point of unconsciousness, and blocked the exit for her to leave. Four hours later, police say he threw her down a flight of stairs and she was finally able to escape.

Charging documents say Freyre attacked his ex, she claims, because he was jealous she attended another fraternity party. Freyre’s roommates were home in another room at the time and the victim repeatedly screamed to try to get their attention, according to the documents.

Following a protest by Freyre’s fraternity Tuesday night, a TikTok documenting it with more than five million views and a petition for Freyre’s expulsion, the university sent a letter "acknowledge the harm inflicted, denounce the violence reported, and call for our community to come together and advance our goals of a campus climate free of all violence."

The university confirmed Freyre is no longer a student and so far they have no information that connects the incident with Freyre’s fraternity. Kappa Delta Rho also posted a statement on Instagram saying his membership was revoked permanently. 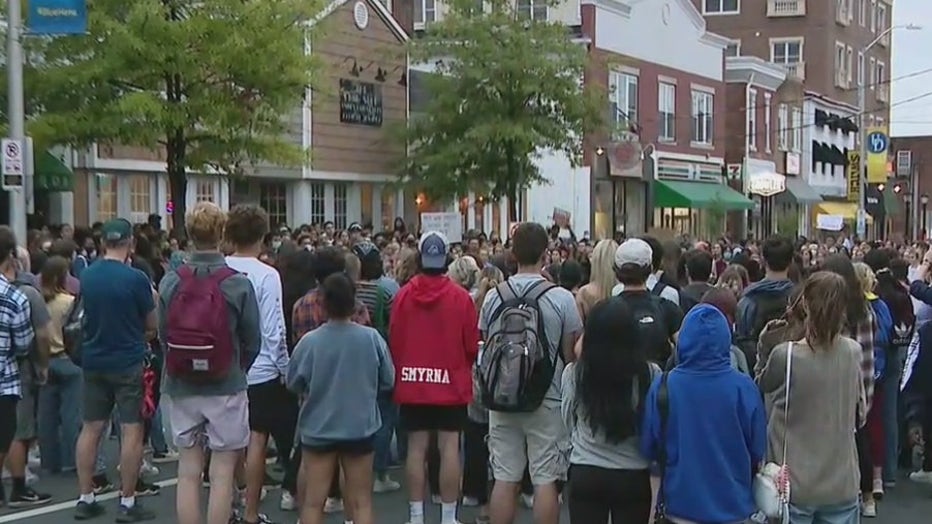 Protests erupt for a second day at the University of Delaware.

A KDR member who asked to remain anonymous says they are now receiving death threats but Freyre’s behavior is not a reflection of other members.

"There are steps we are taking and we want to improve in any way we can because that’s not what we stand for."