LOS ANGELES - The U.S. recorded an all-time, one-day high of 4,327 deaths on Tuesday, according to Johns Hopkins University.

The nation’s overall death toll from COVID-19 has topped 380,000, closing in fast on the number of Americans killed in World War II. Confirmed infections in the U.S. have reached about 23 million.

The grim milestone comes as researchers from the U.S. Centers for Disease Control and Prevention found that people who do not exhibit COVID-19 symptoms transmit more than half of all coronavirus cases.

The CDC model echoes findings of previous research, which indicates that asymptomatic individuals are believed to be contributing to the rapid spread of COVID-19.

The spread of the deadly coronavirus from people who don’t exhibit any symptoms is alarming to medical experts, who have been calling upon people to strictly practice measures such as mask wearing, hand hygiene and social distancing until vaccines are widely available.

The need for these measures is especially apparent as the U.S. enters the most lethal phase of the outbreak yet as hospitals across the country experience crippling high capacities, even as vaccines are slowly being rolled out. 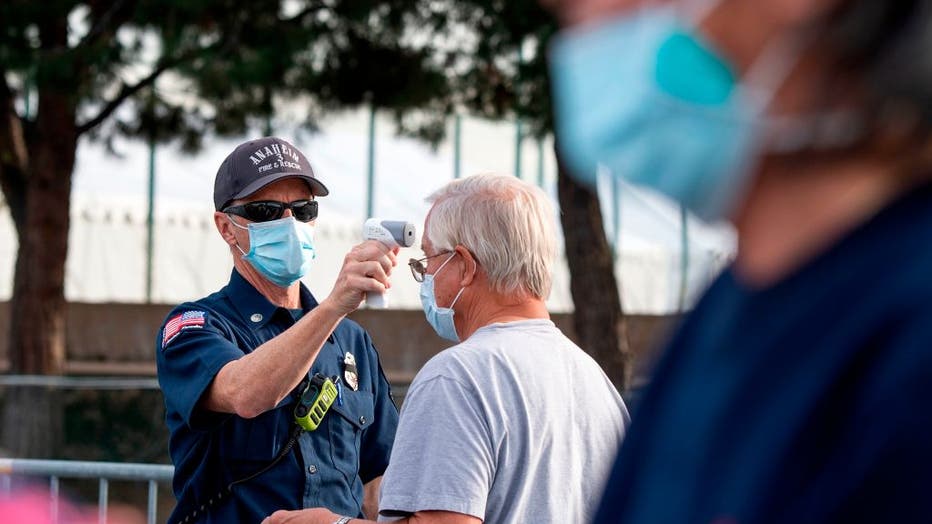 People have their temperature checked as they arrive at a Disneyland parking lot to receive Covid-19 vaccines on the opening day of the Disneyland Covid-19 vaccination "super Point-of-Dispensing" (POD) site, January 13, 2021, in Anaheim, California.

According to the COVID Tracking Project, the U.S. recorded 130,383 hospitalizations related to COVID-19 on Wednesday.

The Mississippi Health Department said on Tuesday that the state cannot take any more appointments for coronavirus vaccinations because of a "monumental surge" in demand after Gov. Tate Reeves announced that more people are eligible for vaccinations.

In Las Vegas, one hospital said it declared a capacity crisis over the weekend, citing a surge of COVID-19 patients that overfilled its intensive care unit.

Leaders of Arizona's major hospitals say the state is teetering on the brink of having to ration life-saving care as it faces the worst COVID-19 infection rate in the country, the Associated Press reported on Tuesday.

The chief clinical officers of Arizona’s five biggest hospital systems spoke Wednesday at a joint news conference to implore the public and the state to do more.

California has seen virus cases and hospitalizations explode since Thanksgiving, though in recent days the numbers have flattened. Newly reported cases over the last seven days in the nation’s most populous state have far outpaced others, such as Texas and Florida — the second- and third-most populated U.S. states.

In response, state public health officials followed federal guidance by announcing that people 65 and older could now get the vaccine, joining the already eligible next tier of emergency workers, teachers, childcare providers and food and agriculture workers.