Vets think the 3-year-old dog, Mortimer, had been taking the pacifiers from the family's two children over the course of months.

BOSTON - A veterinary hospital in Boston got quite a surprise recently when a family brought in their bulldog after he stopped eating.

It turns out that the dog had 19 baby pacifiers in his stomach.

The issues began in April when the family noticed that their 3-year-old dog, Mortimer, started getting nauseous before meals. His owner, Emily Shanahan, brought Mortimer to the vet at the first sign of vomiting.

“At the time he was diagnosed with an unrelated vomiting syndrome that we hoped would get better with medicine,” Shanahan said.

But the medicine didn't help. Shanahan, who is a doctor herself, realized that the problem was getting worse instead of better after a couple of months.

She said Mortimer stopped following her around the house and would often be found napping upstairs away from the family, which was unusual. He eventually stopped eating entirely.

Shanahan went to Angell Animal Medical Center, where they took an X-ray and discovered the pacifiers packed into his stomach. 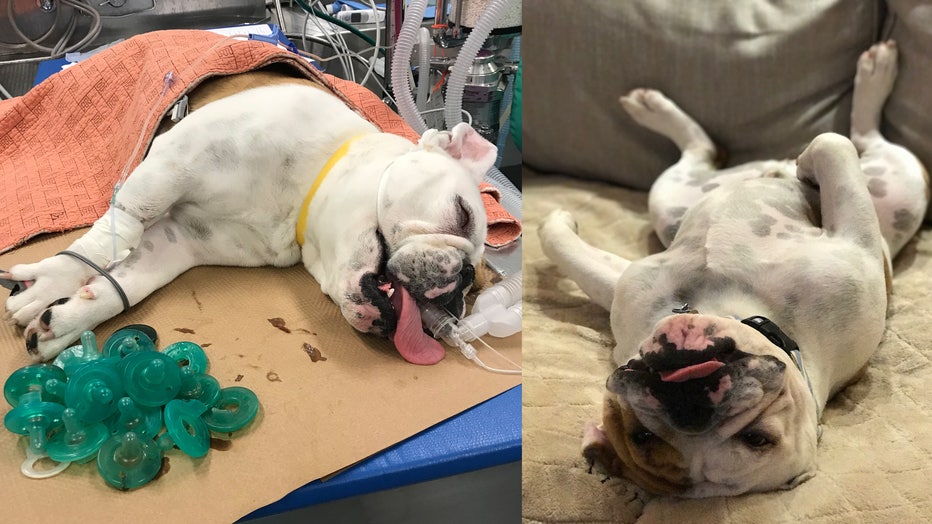 It’s hard to imagine any dog could swallow 19 pacifiers, but Mortimer managed to do it. (Photo credit: MSPCA-Angell / Emily Shanahan)

Vets think Mortimer had been taking the pacifiers from Shanahan's two children over the course of months.

“I was shocked because even though I have two small children at home I’d never imagined he was eating their pacifiers,” Shanahan said.

The pacifiers were removed using a medical scope that did not require surgery. If not for the family's urgency to seek out care for their beloved dog, things would have gotten much worse for him, according to Dr. Doug Brum, Mortimer’s primary veterinarian at Angell.

Vet surgeons at the facility said they have removed many different objects from bellies of pets over the years, including guitar strings, wristwatches, safety pins, diamond rings, perfume bottles and more.

“Mortimer isn’t the first dog to land in this situation and he won’t be the last,” said Brum. “But we’re just so glad he’s recovered and back home with his family.”

Shanahan said that Mortimer is now back to his normal self.

“We absolutely love this dog and would do anything for him,” she added.