PHILADELPHIA - Most of the region woke up to a blanket of fresh snow Thursday morning. Philadelphia and northern counties received a coating, while areas south of the city saw upwards of 3 inches.

The storm system, which triggered a Winter Weather Advisory for most of the region, moved into the area just before midnight on Wednesday. While snowfall in Philadelphia didn't amount to much more than a coating, areas south and east of the city saw snowfall totals approach 5 inches.

The heaviest banding of snow was seen in interior parts of southern New Jersey and the northern counties in Delaware. Parts of Delaware, Chester and Montgomery counties also saw the brunt of the storm. 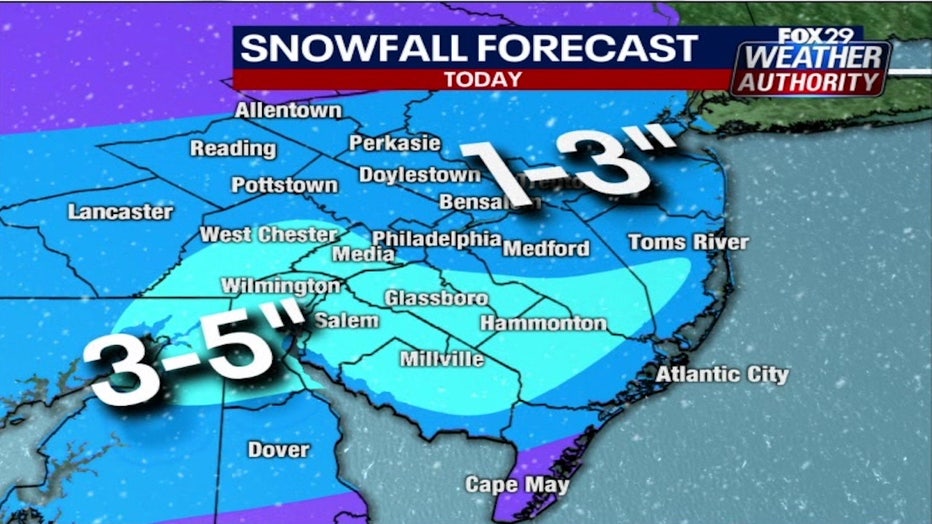 SUV flips onto its side after skidding on ice in Vineland, NJ

FOX 29's Steve Keeley has reports on a car that flipped onto its side after skidding on slick roads in Vineland, NJ.

Snow will continue to fall throughout the morning in southern New Jersey and parts of Delaware, and pull offshore sometime before noon. Cloud cover will linger for most of the day and temperatures are expected to hover near the freezing point.

Another brief rush of snow will impact the region around 10 p.m. Thursday night. Snowfall totals are not expected to amount to anything more than a dusting.

Friday will be partly cloudy will bitterly cold temperatures that will struggle to break past the freezing point. Another chance of snow and a wintry mix is slated for the region Friday into Saturday.