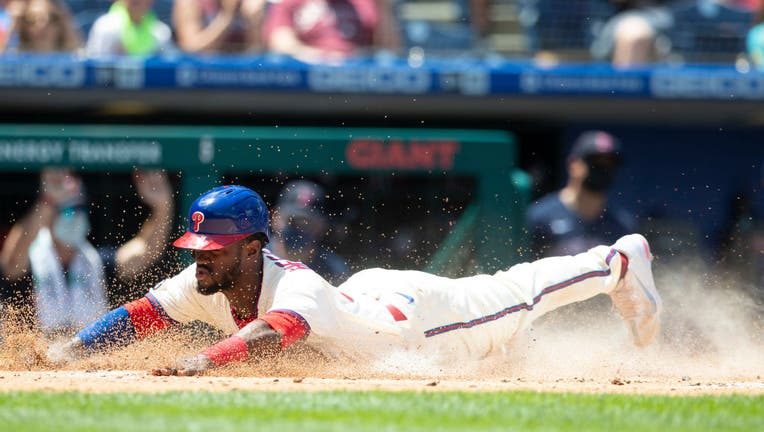 PHILADELPHIA, PA - MAY 23: Odubel Herrera #37 of the Philadelphia Phillies slides safely into home base in the bottom of the first inning against the Boston Red Sox at Citizens Bank Park on May 23, 2021 in Philadelphia, Pennsylvania. (Photo by Mitche

PHILADELPHIA - Zack Wheeler struck out a career high-tying 12 and the Philadelphia Phillies ended a four-game skid, beating the Boston Red Sox 6-2 on Sunday.

Wheeler (4-2) allowed only three hits in 7 1/3 innings, and retired 17 straight batters after a leadoff single. He matched the dozen strikeouts he had in 2013 for the New York Mets against San Diego.

Philadelphia scored four times in the first off Eduardo Rodríguez (5-3). Rhys Hoskins singled home Herrera with the first run and after Alec Bohm walked, Miller hit a drive just inside the left-field foul pole for his fourth homer of the year.

Rodríguez gave up five hits and walked three in four-plus innings. He threw 103 pitches before departing two hitters into the fifth inning.

The first-inning run support was all Wheeler needed. Facing a Boston lineup that didn’t feature Xander Bogaerts or J.D. Martinez — both given a day of rest by manager Alex Cora before an off-day on Monday.

Only Franchy Cordero’s long home run onto Ashburn Alley in deep right center to lead off the eighth blemished Wheeler’s outing. Rafael Devers hit a solo homer in the ninth off Archie Bradley.

Wheeler improved his overall ERA to 2.38 on the season. He has been masterful at notoriously hitter-friendly Citizens Bank Park as well, going 3-0 in six starts with a 1.88 ERA, 52 strikeouts and just five walks in 53 innings.

Andrew McCutchen added a sacrifice fly and Herrera had an RBI double.

Herrera has made his case to fill Philadelphia’s center field void, hitting .355 with two homers and eight RBIs in 62 at-bats since May 3.

Red Sox: Alex Verdugo was out of the starting lineup for the second straight game because of a left hamstring strain suffered in Friday night’s win. He did come up in the ninth inning as a pinch-hitter for Marwin Gonzalez, grounding into a fielders choice. The Red Sox outfielder is expected to return on Tuesday against the Atlanta Braves.

Phillies: Bryce Harper was out of the Phillies starting lineup on Sunday as he continues to try to shake a 2-for-25 slump with 13 strikeouts in his last seven games with no hits in his last 16 at-bats. Harper has been bothered by a sore shoulder that was exacerbated last weekend against the Blue Jays.

Phillies: Philadelphia hits the road for a nine-game road trip that will start in Miami on Monday. Zach Eflin (2-3, 3.77 ERA) will start for the Phils against Marlins LHP Trevor Rogers (6-2, 1.74)