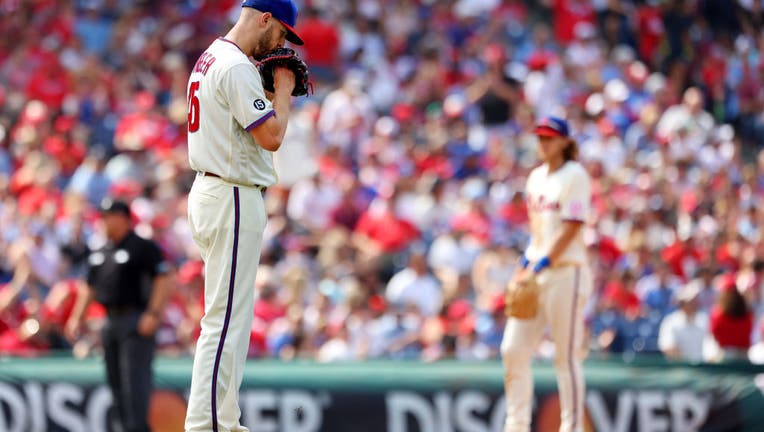 PHILADELPHIA, PA - AUGUST 08: Pitcher Zack Wheeler #45 of the Philadelphia Phillies stands behind the mound before the final out in the ninth inning against the New York Mets in a game at Citizens Bank Park on August 8, 2021 in Philadelphia, Pennsylv

PHILADELPHIA - Zack Wheeler pitched a two-hitter and struck out 11, Bryce Harper homered and the first-place Philadelphia Phillies finished off a three-game sweep for their eighth straight victory, 3-0 over the fading New York Mets on Sunday.

Jean Segura and J.T. Realmuto also homered to help the Phillies move 2 1/2 games ahead of the Mets in the NL East. The streak is Philadelphia’s longest since winning eight straight in July 2010.

The Mets got a pregame pep talk in the clubhouse from owner Steve Cohen before losing for the seventh time in eight tries. New York arrived at Citizens Bank Park this weekend leading the division.

Following an emotional ceremony to retire the jersey of Roy Halladay, Wheeler (10-6) pitched like the late Hall of Famer.

Wheeler gave up a double to Brandon Nimmo to start the game and then retired 22 consecutive batters until Michael Conforto walked in the eighth. Nimmo singled with one out in the ninth and Wheeler soon struck out slumping slugger Pete Alonso for his fourth career complete game, three of them shutouts.

Wheeler walked only one. He threw 80 of his 108 pitches for strikes.