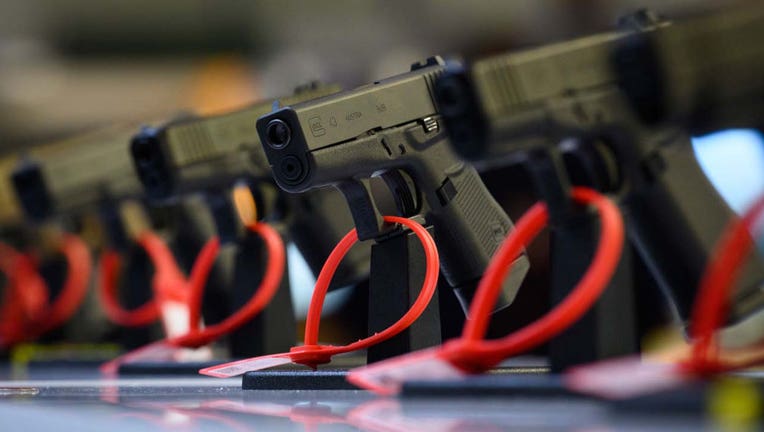 A row of Glock handguns are seen on day one of the DSEI (Defence and Security Equipment International) exhibition at ExCel on September 14, 2021 in London, England. The four day event sees over 1,000 defence, technology and security manufacturers dis

HARRISBURG, Pa. - Gov. Tom Wolf followed through on his veto threat Thursday, rejecting Republican-penned legislation to allow people to carry a firearm openly or concealed, without a permit, adding to his total for Pennsylvania's chief executive with the most vetoes in more than four decades.

Wolf has said it is a top priority of his to address what he says is a gun violence crisis affecting largely minority communities, but the Republican-controlled Legislature has largely rejected his proposals since he took office in 2015.

According to online state records, Wolf has penned his 52nd veto with 13 months left in his second term, more than any other governor since Milton Shapp, who left office in 1979. Wolf has passed Democrat Robert P. Casey, who had 50 vetoes.

The Legislature has never overridden a Wolf veto, with Democrats protecting Wolf and preventing Republicans from gathering the necessary two-thirds majorities in both chambers.

Republicans blame Wolf’s mounting vetoes for what they say is failing to engage with lawmakers, compromise or negotiate. Friction over the pandemic has played a role, with Wolf taking a veto to about a dozen COVID-19-related bills passed by lawmakers.