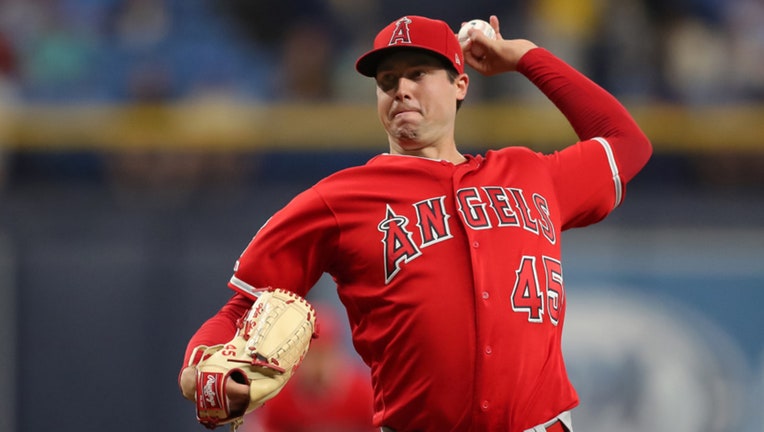 Tyler Skaggs #45 of the Los Angeles Angels throws in the first inning of a baseball game against the Tampa Bay Rays at Tropicana Field on June 13, 2019 in St. Petersburg, Florida. (Photo by Mike Carlson/Getty Images)

TEXAS - A Los Angeles Angels pitcher died Monday ahead of a series between the Angels and Texas Rangers.

Tyler Skaggs, 27, unexpectedly died on Monday in North Texas, the Angels announced. Skaggs’ body was found in a Hilton hotel room in Southlake on Monday afternoon. He was pronounced dead at the scene and no foul play is suspected, Southlake police said in a statement.

Monday night’s Angels-Rangers game has been canceled. The entire Angels team was at Globe Life Park before the clubhouse was closed to media Monday afternoon. The team then departed the ballpark without speaking to reporters.

“Tyler has, and always will be, an important part of the Angels Family,” the Angels said in a post on Twitter. “Our thoughts and prayers are with his wife Carli and his entire family during this devastating time.”

Skaggs started the Angels' game Saturday night against the Athletics. He had been a regular in the Angels' starting rotation since late 2016, when he returned from Tommy John surgery. He struggled with injuries repeatedly over the past three seasons but persevered to become a valuable starter in Los Angeles' injury-plagued rotation. He started 15 games, going 7-7.

The Rangers also offered their condolences to the Angels and Skaggs' family.

Rangers General Manager Jon Daniels said the rest of the Angels series is planned to go on as scheduled starting Tuesday, but that could change because “real life takes precedence.”

The Diamondbacks franchise said in a statement that it was "heartbroken" over Skaggs' death.

"He will always be remembered here as a great teammate and wonderful young man," the team said.

Major League Baseball Commissioner Rob Manfred said in a statement: "All of us at Major League Baseball extend our deepest condolences to Tyler's wife Carli, their family, their friends and all of his Angels' teammates and colleagues. We will support the Angels' organization through this most difficult period, and we will make a variety of resources available to Tyler's teammates and other members of the baseball family.''