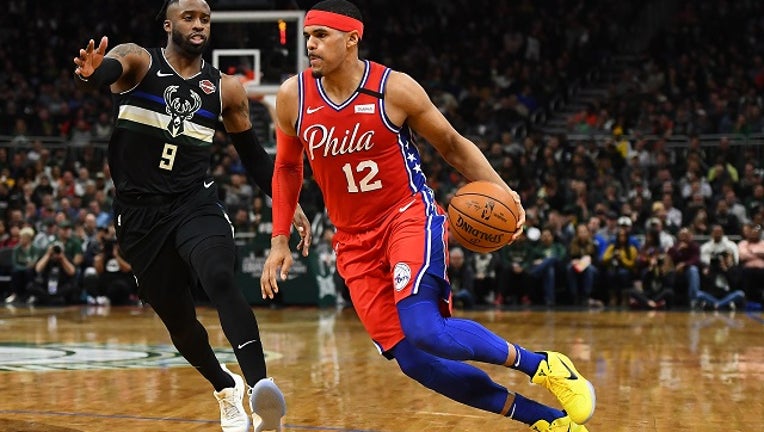 MILWAUKEE - Giannis Antetokounmpo had 36 points and 20 rebounds and the Milwaukee Bucks used a strong defensive effort to beat the Philadelphia 76ers 112-101 on Thursday night.

Antetokounmpo had 30-plus points and 15-plus rebounds for the fifth straight game and the 14th time this season.

The Bucks won for the 12th time in 13 games, avenging a lopsided Christmas Day loss to the 76ers in Philadelphia. The 76ers closed out an 0-4 road swing that also included losses to Atlanta, Boston and Miami.

76ers center Joel Embiid finished with 19 points and 11 rebounds but was frustrated most of the night and shot 6 of 26 from the field and 3 of 10 from 3-point range.

Brook Lopez was in early foul trouble for the Bucks, but twin brother Robin filled in with nine points in 20 minutes while effectively guarding Embiid.

Antetokounmpo had 19 points and 10 rebounds in the first half to help the Bucks to a 54-51 lead at intermission.

Embiid was 1 for 10 from the field and had four points, while Harris led the 76ers with 12 points.

76ers: Philadelphia acquired Glenn Robinson III and Alec Burks from Golden State in a trade deadline deal on Thursday, according to reports, a move made to bolster the 76ers bench. The Sixers later traded James Ennis to Orlando for a 2020 second-round pick to clear one roster spot and waived Trey Burke to clear another. … The 76ers have struggled on the road, going 9-19 while putting a 22-2 record together at home.

“In general, there is a mental toughness that you need to have on the road,” 76ers coach Brett Brown said. “At times, we haven’t had it to the volume and intensity that we need.”

Bucks: Milwaukee remains on pace to become the third NBA team to win 70 games, which would put the franchise in elite company with the 1995-96 Chicago Bulls (72 wins) and 2015-16 Golden State Warriors (73 wins). Bucks coach Mike Budenholzer has downplayed the 70-victory talk but co-owner Marc Lasry said recently he thinks the Bucks can join that club and win a championship. Asked about it in the pregame session, the Bucks coach said it has not been a topic in the locker room. … The Bucks stood pat at the trade deadline while Eastern Conference contender Miami made a key move to land former Warriors super-sub Andre Iguodala. Budenholzer said he believes in the group of guys the Bucks have. “I feel really great about our team,” Budenholzer said. “We’ve been even better for the first 50 games than we were last year. The continuity means a lot to us. We’ve been together for a season and a half, a lot of us. We feel that’s an edge we have. Some years you make a trade and some years you don’t.” … George Hill remains out with a left hamstring injury, missing his fourth straight game on Thursday.

Bucks: Play at the Orlando Magic on Saturday night.