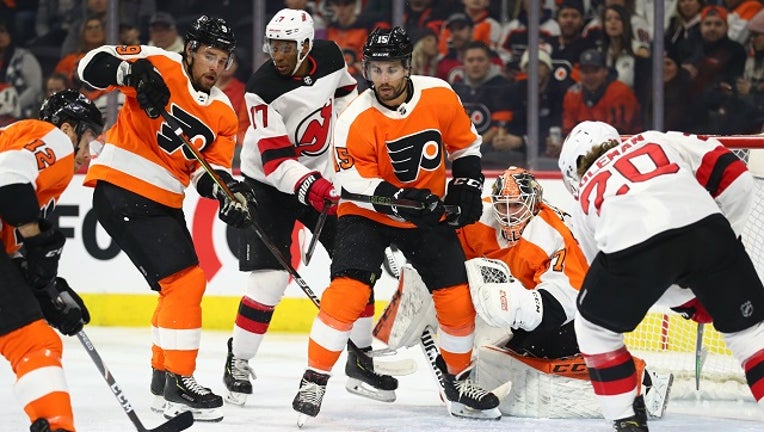 Blackwood — a rookie who improved to 16-12-7 on the season — faced a heavy barrage in the second and third periods, in which the Flyers outshot the Devils by a 37-9 margin.

“That was pretty cool,” Blackwood said. “That’s one of those games that goes your way. The guys did a great job of boxing out and taking care of things.”

It was the first time that Philadelphia had been shut out in a game where it took 46 shots or more since a 48-shot, 3-0 home loss to the Chicago Blackhawks on Feb 15, 1969.

“We had a lot of shots tonight, but I don’t think anyone is happy with that performance,” Flyers defenseman Matt Niskanen said. “We know we can be better. We have been better. We just have to show it again on Saturday.”

The Devils chased Philadelphia goaltender Brian Elliott from the game early in the third period. Elliott allowed four goals on 16 shots before being replaced by Alex Lyon, who yielded Wood’s second goal.

“In an 82-game schedule, there's no excuses,” Flyers coach Alain Vigneault said. “But some nights you're going to get games like this. We got a bad one tonight. And what we need to do is go home, get some sleep, come to work tomorrow, have a good practice and get ready for one of the top teams in the league (at Washington on Saturday).”

The Devils started the scoring 13 seconds into the game when Coleman’s backhand from the slot in front got between Elliott’s pads for his 20th goal of the season.

“It can take the wind out of sails, obviously, scoring on the first shot,” Coleman said. “More importantly, it speaks to the way we’re getting off to quick starts in the periods. Anytime you can put a team on their heels early, it’s going to create that confidence and put a little doubt in their minds. We took advantage of the opportunities we had.”

Severson added a power-play goal early in the second period when his wrist shot from the left circle went over Elliott’s right shoulder and into the upper corner of the net.

New Jersey put the game away early in third. Zacha's shot on an odd-man rush beat Elliott for his sixth goal of the season at the 1:10 mark. Wood added a shorthanded goal on a breakaway just over three minutes later to make it 4-0, then followed later in the third with his 10th goal of the season by splitting two Flyers defenders and firing it between Lyon’s legs.

“Tonight, I felt like we did a great job,” Wood said. “We got the first goal and kept on trying to score. Our foot was on the gas for a full three periods.”

NOTES: Philadelphia's Joel Farabee sat out because of complications from the flu. He is listed as day-to-day. ... Jakub Voracek played in his 900th NHL game and Flyers captain Claude Giroux extended his consecutive-games streak to 300. ... Blackwood recorded his first NHL point with an assist on Severson’s goal. ... New Jersey snapped a three-game losing streak to Philadelphia.

Flyers: At Washington on Saturday night.