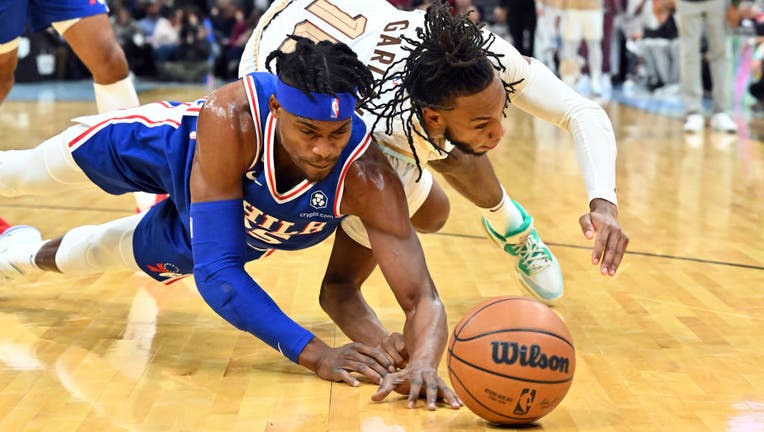 CLEVELAND, OHIO - NOVEMBER 30: Danuel House Jr. #25 of the Philadelphia 76ers fights for a loose ball against Darius Garland #10 of the Cleveland Cavaliers during the second half at Rocket Mortgage Fieldhouse on November 30, 2022 in Cleveland, Ohio.

CLEVELAND - Caris LeVert scored 22 points off the bench, Darius Garland had 21 points and nine assists and the Cleveland Cavaliers routed the Philadelphia 76ers 113-85 on Wednesday night.

Donovan Mitchell added 18 points and six assists for Cleveland, which led by a season-high 33 points in the fourth quarter. The Cavaliers are 9-1 at Rocket Mortgage FieldHouse, the third-best home mark in the NBA.

"For us to take the next step, we’ve got to take it on the road and play the same way," LeVert said. "That’s something we’re working on and I think we’re finding our rhythm as a group. When one of us has it going, like I did tonight, we keep finding them."

All-Star center Joel Embiid led Philadelphia across the board with 19 points, six rebounds and six assists, and Shake Milton scored 14 points. The 76ers had their three-game win streak snapped in the opener of a three-game trip.

Cleveland built multiple 30-point leads in the second half before pushing it out to 109-76 on LeVert’s 3-pointer. LeVert also had six rebounds and four assists, and Evan Mobley scored 16 first-half points and grabbed eight rebounds.

"We’re really good," Garland said, chuckling. "This was a good win and it feels good to be back at home. Our fans are always great, but we need to take this competitive nature on the road with us (where the Cavaliers are 5-7)."

Philadelphia’s starting backcourt of All-Star James Harden and Tyrese Maxey remains out with injuries. The 76ers had won five straight over Cleveland.

The Cavaliers played without All-Star center Jarrett Allen, who missed his third consecutive game with a low back bruise.

Cleveland shot a scorching 94.1% in the second quarter and scored 44 points, two shy of its franchise record, to carry a 69-48 advantage into the break. Mobley went 8 of 10 from the field in the first half, soundly outplaying Embiid.

Embiid missed a pair of technical free throws and was whistled for one of his own in his second game back after missing four straight with a sprained left mid-foot.

"The Cavs compete and they’re going to be tough for a long time," 76ers coach Doc Rivers said. "I think it helps that the clear stars are Donovan and Garland, so everyone else has to play their roles."

76ers G De’Anthony Melton was acquired from Memphis to add depth off the bench, but has started 12 games since Harden was hurt.

Melton, who is averaging 11.0 points and 3.3 assists, extended the NBA’s longest active streak of games with multiple steals to seven.

"De’Anthony is a very easy guy to play with, but I don’t think he loves being the primary ballhandler at times," Rivers said. "We told him if you want to get respect in the locker room, go out and stop somebody. De’Anthony has done that."

76ers: Harden (right foot tendon strain) missed his 13th consecutive game and G Jaden Springer (right quad strain) sat out his eighth in a row. … Maxey (left foot fracture) was injured against Milwaukee on Nov. 18 and could return in mid-December. … Two-way G Julian Champagnie is on a G League assignment with Delaware.

Cavaliers: F Kevin Love (right thumb fracture) has missed six of the past seven games since breaking his thumb on Nov. 18 against Charlotte. "So much of what he does is with his hands, so we’re trying to get it to calm down," coach J.B. Bickerstaff said. … F Lamar Stevens (non-COVID illness) was unavailable for the fourth straight game.

76ers: At Memphis on Friday night.