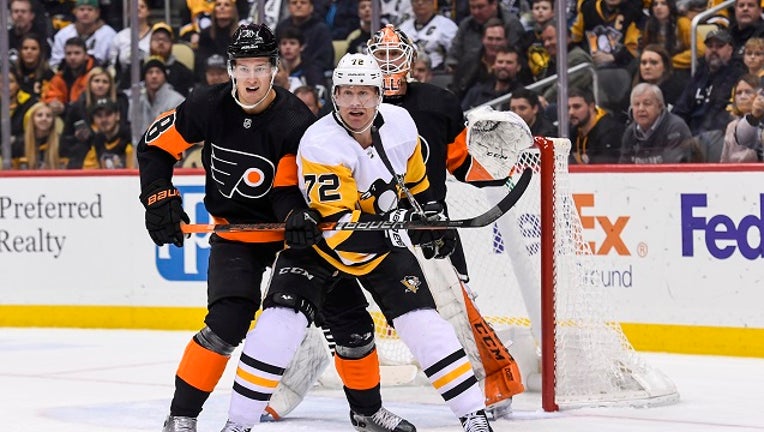 PITTSBURGH - Sidney Crosby beat Brian Elliott 55 seconds into overtime to lift the Pittsburgh Penguins to a 4-3 win over the Philadelphia Flyers on Friday night.

The Penguins blew a two-goal lead but recovered for their NHL-leading 19th home victory when Crosby's wrist shot slipped by Elliott for his ninth of the season.

Pittsburgh's promising first half — one in which the Penguins stayed in the thick of the Metropolitan Division race despite injuries up and down the roster, from Crosby to Malkin to Jake Guentzel — ended with a thud, a dismal 3-0 loss to the Flyers in Philadelphia that left head coach Mike Sullivan fuming.

The nine-day layoff didn't seem to do Pittsburgh any favors. The Penguins sent all of three shots Elliott's way in the first period. The Flyers only managed four on Jarry, but the fourth turned out to be a power-play goal from Voraceck with 27 seconds left in the period that came at the end of a sequence in which Jarry found himself sprawled in the crease, giving Voracek plenty of time to fire into the open net thanks to a slick cross-ice pass by Niskanen.

The Penguins emerged from their layoff in the second period thanks in part to a couple of fortunate bounces. Malkin tied it 3:55 into the second when Patric Hornqvist's flip from the top of the zone skipped by Elliott and right to Malkin all alone at the far post. The Russian star jabbed at the puck, getting enough of it to pull Pittsburgh even.

Rust's team-leading 22nd came just 81 seconds later, a power-play tally that came courtesy of a pass from Crosby, who fed Rust all alone in the slot. Philadelphia's Travis Sanheim got a piece of it, but couldn't stop it from crossing the goal line to put Pittsburgh in front 5:16 into the second. Letang capped the Penguins' outburst by skating in deep and flicking a shot from along the goal line that smacked off an out of position Elliott and into the net.

Pitlick pulled the Flyers within one with 3:31 left in the second during a sequence that started with a Letang turnover while trying to clear the zone and ended with Pitlick firing a shot that zipped by Jarry for Pitlick's fifth of the season. Laughton tied it 2:20 into the third when he collected a redirected puck and beat Jarry, to set up a thrilling finish.

NOTES: The Penguins held a moment of silence before the opening face-off in honor of fallen basketball icon Kobe Bryant that included the stairwells inside the arena being bathed in purple and gold light. ... Pittsburgh paid tribute to Philadelphia's Oskar Lindblom by wearing T-shirts following the morning skate that read “Oskar Strong.” Lindblom's career is on hold while he battles a rare form of bone cancer. ... The Penguins went 2 for 2 on the power play. The Flyers were 1 for 3 with the man advantage.

Penguins: Face Metropolitan Division rival Washington on Sunday, the first of four meetings between the clubs over the final 30 games of the season.