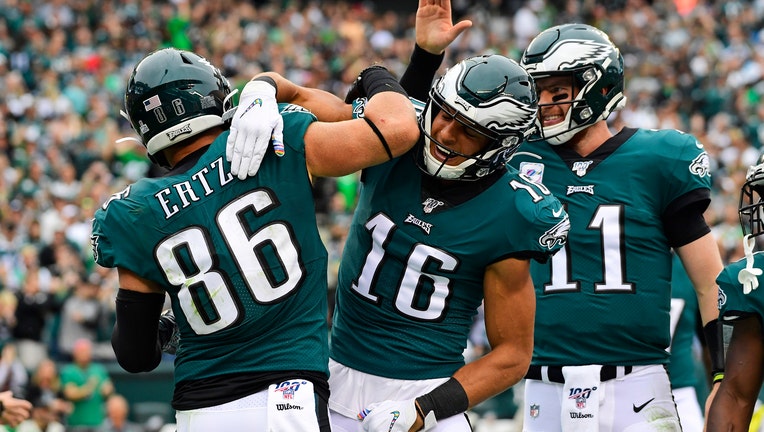 PHILADELPHIA, PA - OCTOBER 06: Mack Hollins #16 of the Philadelphia Eagles celebrates a touchdown scored by Zach Ertz #86 during the second quarter at Lincoln Financial Field on October 6, 2019 in Philadelphia, Pennsylvania. (Photo by Corey Perrine/G

PHILADELPHIA - The Philadelphia Eagles were the real Gang Green defense.

Nate Gerry returned an interception for a score , Orlando Scandrick took a strip-sack the distance and Philadelphia routed the New York Jets 31-6 on Sunday.

But Philly's defense didn't need much help. The Eagles became the first team in NFL history to record 10 sacks and score two defensive touchdowns in a single game.

"Our defense carried us," Howard said.

Brandon Graham had a career-high three of Philadelphia's 10 sacks after he only had four last season. The performance was reminiscent of Buddy Ryan's old defense led by Reggie White in the late 1980s. That unit was called the "Gang Green" defense, which has been the Jets' team nickname for years.

"We finally got them sacks in a big way," Graham said.

Sam Darnold missed his third straight game for the Jets (0-4) while he recovers from mononucleosis, so Falk made his second start after opening the season on New York's practice squad. Falk threw two interceptions and was sacked nine times before leaving late in the game and being replaced by David Fales, who was re-signed by the Jets on Friday. Falk replaced Trevor Siemian - Darnold's original backup - after he sustained a season-ending ankle injury in Week 2.

"I'm not going to make excuses. I have to perform better," said Falk, who didn't get snaps with the starters until Friday because the Jets hoped Darnold would be cleared to play.

Gerry gave the Eagles a 14-0 lead in the first quarter when he jumped in front of Falk's fourth-down pass and returned it 51 yards.

"Where we want to be as a team, the defense has to set the standard," Gerry said.

Scandrick, playing his first game with the Eagles, had two sacks on corner blitzes. He stole the ball from Falk on the second one and ran it back 44 yards to make it 31-6 in the fourth quarter.

"I was just finishing the play and not being satisfied with the sack," Scandrick said about ripping the ball out of Falk's hands.

The defense dominated the Jets from the start, holding an opponent to no points on an opening drive for the first time this season.

But the Eagles couldn't get anything going on their next four possessions until Rodney McLeod returned an interception 23 yards to the Jets 42 late in the second quarter.

Wentz then fired an 11-yard TD pass to Zach Ertz for a 21-0 halftime lead.

The Jets snapped the shutout after Corey Clement muffed a punt and Trenton Cannon recovered at the Eagles 19.

Vyncint Smith scored on an end-around on the next play, but the 2-point conversion failed. That was New York's second offensive touchdown this season and first since Week 1.

The Eagles had a pick-6 and a fumble return TD for the first time since Ryan's defense did it on Nov. 12, 1990, against the Redskins. It's the third time they've done it in the Super Bowl era.

The Eagles are 11-0 against the Jets.

The Eagles scored TDs on their first two possessions inside the red zone to extend their streak to nine straight before settling for a field goal on the next trip inside New York's 20.

Jets: LB C.J. Mosley missed his third straight game with a groin injury and LG Kelechi Osemele was out with shoulder/knee injuries.

Eagles: Sproles left with a quad injury in the second half.