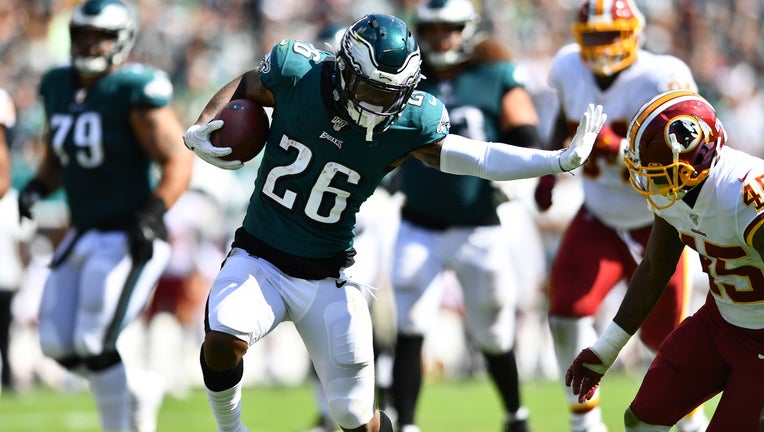 PHILADELPHIA, PA - SEPTEMBER 08: Philadelphia Eagles Running Back Miles Sanders (26) attempts a stiff-arm on Washington Redskins Cornerback Dominique Rodgers-Cromartie (45) in the second half during the game between the Washington Redskins and Philad

PHILADELPHIA - The Philadelphia Eagles cut their two top rushers from last season because they have several options to run the football.

They delivered in Week 1.

Jordan Howard, Darren Sproles and Miles Sanders combined for 116 yards on 26 carries in a 32-27 win over Washington. They were so effective that Corey Clement, a Super Bowl hero two seasons ago, didn't get a carry.

Howard had 44 yards rushing and an average of 7.3 yards per carry. The 36-year-old Sproles had 46 yards on nine carries. Sanders, a rookie second-round pick, ran 11 times for 25 yards.

"Just have to be ready when your number is called and take advantage of the opportunities," Howard said Thursday.

The group could have an even bigger game Sunday night in Atlanta. The Falcons surrendered 172 yards rushing in a 28-12 loss at Minnesota.

"We have confidence in the guys running all the schemes, but we do try to get everybody involved and in the mix," offensive coordinator Mike Groh said. "Then you have to try to balance that with ... you have to do a great job self-scouting yourself and making sure that they're in on some things from a weekly basis that maybe didn't show the week before. We're constantly massaging that and managing that, and we have a lot of confidence in those guys to run all the runs that we have on each game plan."

The Eagles, led by LeGarrette Blount and Jay Ajayi, had the NFL's third-ranked rushing offense when they won the Super Bowl following the 2017 season. But the team was decimated by injuries last year. Ajayi and Clement sustained season-ending knee injuries. Sproles missed 10 games and Blount wasn't re-signed.

So Philadelphia turned to Josh Adams. The rookie free agent ran for 511 yards. Wendell Smallwood, a fifth-round pick in 2016, had 364 yards rushing. But the Eagles had the league's 28th-ranked rushing offense. Both players were among the final cuts this year.

Sanders was impressive in training camp and could end up being the featured back. Howard had success in Chicago and ran hard against the Redskins. Sproles still has excellent speed at his age.

"When we put the run game together, we think about the backs and who is going to be in on certain plays," coach Doug Pederson said. "So you can see how dynamic that can be and we're just going to continue to work it that way. Sometimes it's the hot hand, but sometimes it's based on game plan and who is in at that particular time."