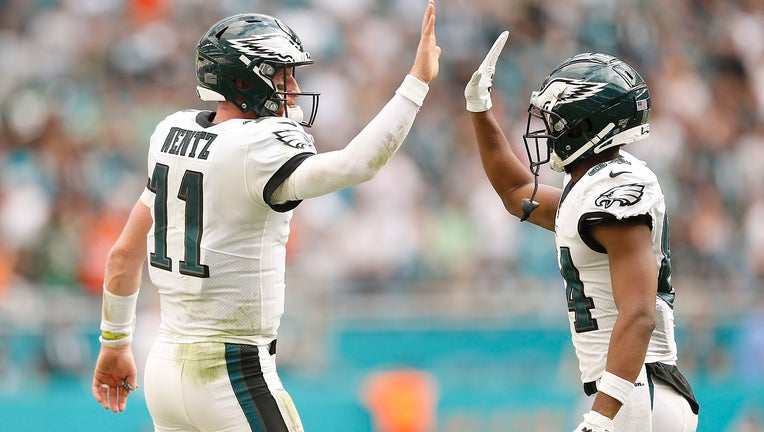 PHILADELPHIA - Greg Ward outplayed Patrick Mahomes to win a district championship in high school and was a star quarterback in college before converting to wide receiver in the pros and getting cut three straight years in training camp.

Now, Ward is the most reliable wideout on the Philadelphia Eagles after spending two-plus seasons on the practice squad.

It's been quite a journey for the 24-year-old who caught his first career touchdown pass with 32 seconds remaining Sunday to put Philadelphia ahead against Washington in a game the Eagles ended up winning 37-27.

"You always think about big catches like that," Ward said. "It is truly a blessing to be in that position and in that environment. I am truly blessed, and I am thankful. I have been working a lot just to be able to make that play. I am just grateful."

The victory kept the Eagles (7-7) in position to win the NFC East. They'll host Dallas (7-7) this week with the division on the line.

Ward threw for 8,704 yards and 52 TDs, completing 67.8 percent of his passes in four seasons at the University of Houston. He also ran for 2,381 yards and 39 TDs. But Ward wasn't drafted and had to earn a spot on Philadelphia's practice squad in 2017. He got a Super Bowl ring that season but was cut twice in 2018. He played for San Antonio in the Alliance of American Football earlier this year before the league quickly shut down.

He caught six passes in a loss to Seattle in Week 12 and four more in a comeback win over the Giants last Monday night.

With DeSean Jackson and Alshon Jeffery on injured reserve and Nelson Agholor out with a knee injury, Ward was the only wide receiver to catch a pass from Carson Wentz in the win over Washington.

He had seven catches for 61 yards and his first career score came on a fade pass in the back corner of the end zone.

"I can only say good things about Greg, just kept coming up big late in the game like that," Wentz said. "They went into man coverage multiple times and he beat his guy. He was a part of the progression, just kept making plays, making plays. For him to go up and get that ball and play that big in the red zone like that to seal the deal was sweet."

Five of Ward's receptions against Washington came in the fourth quarter, including three in the final two minutes.

"He has been here for a couple years now," Wentz said. "He's been on the practice squad and he's been kind of all over, and we've seen what he can do. .. We were having summer workouts together, so I've been around Greg plenty and I know what he can do and what he's capable of, and for him to do it (Sunday) was big for us."

Ward outplayed Mack Hollins for the fifth receiver spot in training camp but lost out to a guy who was drafted by the Eagles in the fourth round in 2017. Hollins was released two weeks ago after going eight straight games without making a catch. His departure coupled with the injuries to the top three guys gave Ward an opportunity.

"We know the type of player that Greg Ward is because we've seen it day-in, day-out," Eagles coach Doug Pederson said. "He's made his impact the last few weeks."

Ward starred at John Tyler High School in Tyler, Texas, and faced Mahomes and Whitehouse High School for a district title in 2012. Mahomes helped his team to a 24-0 lead but Ward led his school back. Ward completed 20 of 24 passes for 323 yards and four TDs and rushed for 162 yards and another score in a 45-38 win. Mahomes threw for 441 yards and four TDs and ran for another one but lost a fumble that led to the winning score.

After Ward caught the game-winning TD pass against Washington, Mahomes wrote on Twitter: “That’s my guy man! Congrats! But im still mad he beat me for the district championship in high school”