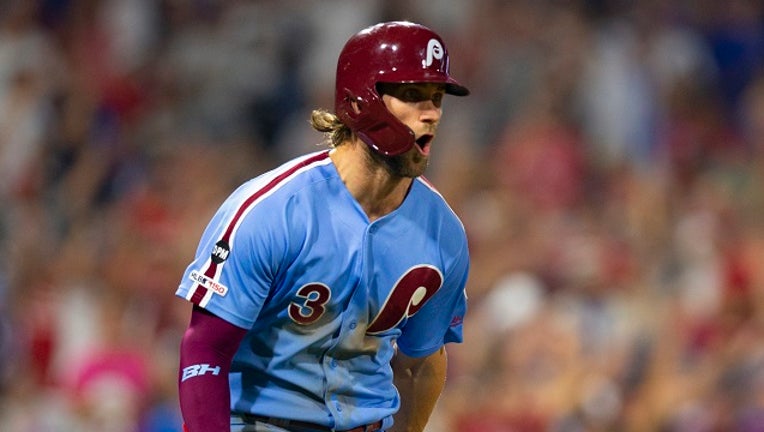 Bryce Harper #3 of the Philadelphia Phillies reacts after hitting a walk-off grand slam against the Chicago Cubs at Citizens Bank Park on August 15, 2019 in Philadelphia, Pennsylvania. The Phillies defeated the Cubs 7-5. (Photo by Mitchell Leff/Getty

PHILADELPHIA (AP) - Bryce Harper blasted a grand slam with one out in the ninth inning, capping a six-run rally that sent the Philadelphia Phillies over the Chicago Cubs 7-5 Thursday night for a three-game sweep.

Harper delivered his biggest hit yet in his first season with the Phillies, celebrating while running around the bases and then getting mobbed by teammates at the plate.

But the Phillies rallied against Chicago's bullpen and moved within one game of the Cubs for the second wild-card spot in the NL.

Nick Senzel and Eugenio Suárez each drove in a run for Cincinnati, which stopped a four-game slide.

St. Louis had won five in a row to move into a virtual tie with Chicago for the NL Central lead. The Cubs had a chance to move in front again, but they lost 7-5 at Philadelphia on Bryce Harper's game-ending grand slam.

Gray (8-6) walked three and hit a batter while throwing 97 pitches.

Michael Wacha (6-6) extended the St. Louis pitching staff's streak of consecutive scoreless innings to 22 before the Reds pushed across two runs in the fifth.

The Dodgers increased their homer total this week at pitcher-friendly Marlins Park to 14, a franchise record for a three-game series. Max Muncy hit his 29th, Corey Seager his 12th and Kyle Garlick his third.

Bellinger reached the 40 mark for the first time with a three-run shot in the seventh.

Brian Anderson, Starlin Castro, Jorge Alfaro and Lewis Brinson each had three RBIs for Miami, and Jon Berti scored three times. The last time Marlins had four players with three or more RBIs was in 2006.

Caleb Smith (8-6) needed 106 pitches to get through five innings but allowed only one hit and one run - on Garlick's homer in the fifth.

Mallex Smith stole two bases, giving him 34, the most in the majors. The Mariners won two of three after losing eight of their previous nine.

Detroit finished 4-7 on its 11-game homestand to fall to 17-43 at home. The Tigers need to win five of their last 21 games at Comerica Park to avoid becoming the first team to lose 60 times at home.

Tigers starter Spencer Turnbull (3-11) allowed three runs and six hits in five innings. Turnbull struck out seven batters in the first three innings, but only retired the side in order in the first. The Mariners put two runners on in the second and scored three runs in the third.