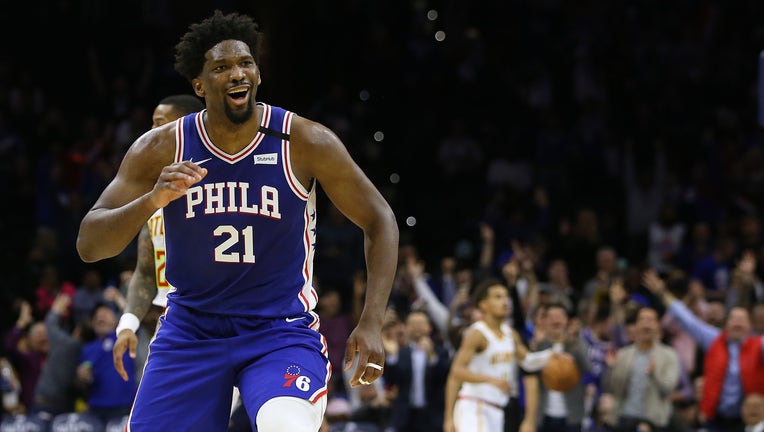 Joel Embiid #21 of the Philadelphia 76ers gestures after scoring a three-point basket for his career high 49th point during the second half of an NBA basketball game against of the Atlanta Hawks at Wells Fargo Center on February 24, 2020 in Philadelp

NEW YORK - The NBA fined Philadelphia 76ers center Joel Embiid $25,000 on Wednesday, two days after he made an obscene gesture on the court and used profane language during a live television interview.

In announcing the fine, the NBA noted that the amount “reflects his multiple prior violations of acceptable on-court decorum.”

The gesture occurred with 17 seconds remaining in the fourth quarter of the Sixers’ 129-112 victory over the Hawks on Monday night. With the clock winding down, Atlanta’s Kevin Huerter came from behind and swiped the ball from Embiid, who was trying to dribble it out. Embiid responded by flashing a middle finger at Huerter. He later apologized.

Embiid scored a career-high 49 points in the game.

Afterward, in a postgame walkoff interview, he tried to clarify after calling himself the best player in the world following an excellent performance last week against Brooklyn. His interview included profanity.