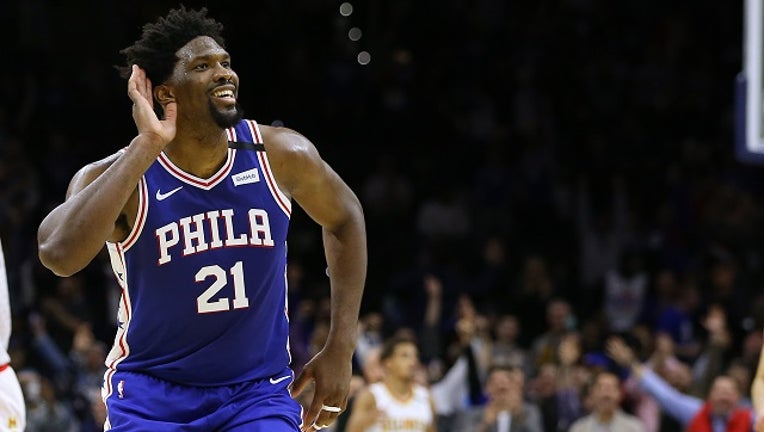 Missing All-Star Ben Simmons for the second time in three games because of a back injury, the Sixers mixed up their starting lineup and got 15 points from Furkan Korkmaz in a reserve role.

Trae Young led Atlanta with 28 points despite missing nine of 11 from 3-point range. De'Andre Hunter added 22 and John Collins had 21 for the Hawks.

After trailing by 21 in the first half, the Hawks outscored Philadelphia 23-9 to start the third quarter. They closed out the period with an 8-0 run and took a 92-91 lead into the fourth after Young nailed a 3.

The Sixers went up to stay on four consecutive free throws by Embiid. Harris sank a 3-pointer to extend the lead to 105-98.

Simmons only played five minutes in a loss at Milwaukee on Saturday before exiting. He had tests on Sunday and needs further evaluation.

Coach Brett Brown wouldn't speculate on the extent of the injury or how long Simmons will be sidelined. But it appears the team is preparing to play without him for a while.

Hawks: The loss snapped a two-game winning streak. The Hawks haven't won three in a row all season. ... Young, who entered averaging 30.0 points per game, only had 10 in the first half. Young had 39 points and 18 assists in a 127-117 victory over the 76ers at home on Jan. 30. ... Coach Lloyd Pierce was an assistant for five seasons under Brown in Philadelphia before going to Atlanta last year.

76ers: Al Horford was back in the starting lineup after coming off the bench the last three games The 6-foot-9. Horford had started 835 straight games since his rookie season in 2007 before Brown took him out of the starting lineup on Feb. 11. ... Shake Milton started at point guard for Simmons. Shooting guard Josh Richardson also played the point.

Hawks: Host Orlando on Wednesday to begin a stretch of seven of nine games at home.