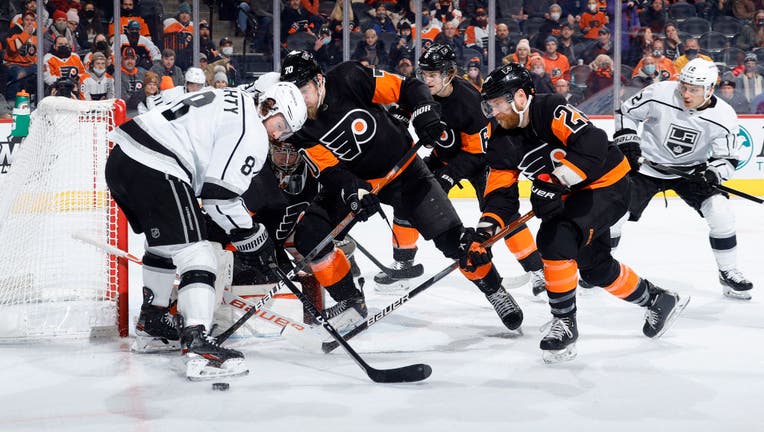 PHILADELPHIA, PENNSYLVANIA - JANUARY 29: Drew Doughty #8 of the Los Angeles Kings, Rasmus Ristolainen #70 and Claude Giroux #28 of the Philadelphia Flyers challenge for the puck during the third period at Wells Fargo Center on January 29, 2022 in Phi

PHILADELPHIA - Cam Atkinson was sick of losing— and he went out and did something about it.

Atkinson scored twice in regulation, assisted Scott Laughton’s goal 2:22 into overtime and the Philadelphia Flyers snapped a franchise-record 13-game losing streak with a 4-3 victory over the Los Angeles Kings on Saturday.

"I hate losing, we all hate losing," Atkinson said. "It was one of those things where I didn’t want to lose this one."

Laughton scored on the rebound of Atkinson’s shot as the Flyers picked up their first victory since Dec. 29.

"Obviously, nothing better than winning," Atkinson said. "It’s been a long time."

With a long losing streak and heavy snowstorm blanketing Philadelphia, the Flyers thanked the diehard fans who showed up with free parking outside and free pretzels, hot dogs and soda inside the arena. The club closed the upper level, and the lower level appeared about 75% full.

The Flyers gave those who braved the weather something to cheer about, something that has been rare of late.

But it sure wasn’t easy.

The Flyers looked like they had their first win in 2022 in regulation, but Anze Kopitar scored on a backhander after a scramble in front of the goal with 37.4 seconds left in the third.

Laughton sent the fans home happy, though – and likely allowed the Flyers to breathe a huge sigh of relief – when he followed Atkinson’s shot from the slot with a rebound goal from close range. Ivan Provorov was in the crease, but the goal stood after an officials’ review.

"We had some guys that sort of said, ‘That’s enough,’" Flyers interim coach Mike Yeo said.

Viktor Arvidsson had a goal and an assist, and Arthur Kaliyev and Kopitar also scored for the Kings. Los Angeles was playing the fourth contest of a six-game trip.

Kings coach Todd McLellan liked the way his team battled back late, but felt much of the contest left a lot to be desired.

"We just weren’t sharp enough for the other 50 minutes," he said. "We weren’t sharp defensively, we didn’t check well. We’re probably lucky we deserved a point."

Atkinson’s second goal was a short-handed tally and came on a breakaway, putting Philadelphia up 3-1 with 10:54 remaining in regulation. Atkinson sped toward Kings goalie Jonathan Quick, then hit the brakes and deked to his right. Quick lunged to stop the forehand try with an excellent glove stop, but Atkinson used his backhand to put home the rebound for his team-leading 17th tally.

Kaliyev brought Los Angeles within a goal just 45 seconds later when his slapshot through a screen on a power play got past Hart.

After a flurry of shots and a scramble in front, Kopitar sent a backhander from the circle under a sprawling Carter Hart to force OT, where the Flyers prevailed.

Mayhew atoned for a silly penalty earlier in the first period that Philadelphia escaped without damage thanks to an excellent save by Hart on a Kings power play by netting his third of the season 9 ½ minutes into the contest. Rasmus Ristolainen displayed stellar stickwork in the slot before a backhand pass to Mayhew, whose wrister from a sharp angle beat Quick.

"It was a great move; he put it right on my tape," Mayhew said.

The Flyers got some puck luck, too, as two Kings shots clanged off the iron, including Alex Iafallo’s chance with 5:42 to play in the period.

Each team got a goal in the second.

Atkinson’s first gave the Flyers a 2-0 lead midway through the period. Claude Giroux sent the puck toward the net during a shift change. It took a high hop in front of Quick and bounded off the Kings goalie to a wide-open Atkinson, who shot high over Quick’s left shoulder.

Arvidsson pulled Los Angeles within 2-1 with 4:45 left in the second, finishing a 2-on-0 break with Sean Durzi. Phillip Danault got the secondary assist and really made the goal happen with a twirl-around backhanded pass to Durzi that left the Flyers helplessly out of position.

The Flyers held a pregame ceremony to honor defenseman Keith Yandle, who broke the NHL record for consecutive games played with his 965th in a row on Tuesday night.

Philadelphia presented Yandle, who hasn’t missed a game since March 26, 2009, with a gold puck, a Tiffany crystal and an iron man helmet.

Kings: Anderson (upper body) didn’t return to the ice after the first period.

Flyers: C Derick Brassard (hip) was a noncontact participant in practice on Friday. Brassard was injured on Dec. 8, returned for one game on Jan. 6 and hasn’t played since. There’s no timetable for his return.

Kings: At Pittsburgh on Sunday.

Flyers: Host Winnipeg on Tuesday before a seven-day break.