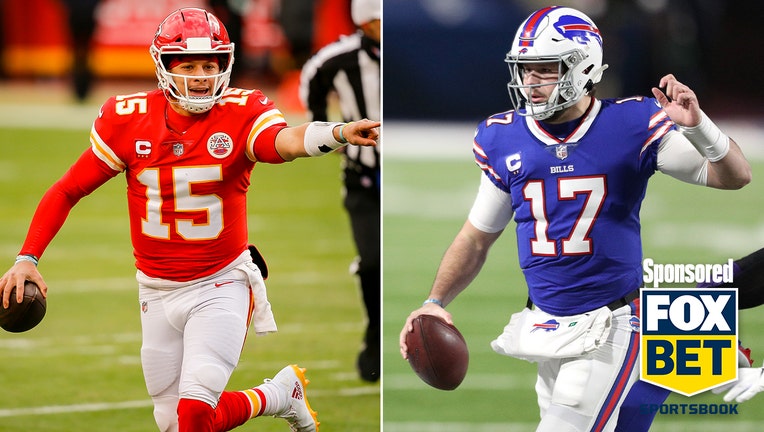 LEFT: Patrick Mahomes #15 of the Kansas City Chiefs looks for an open receiver in the second quarter against the Cleveland Browns in the AFC Divisional Playoff at Arrowhead Stadium on January 17, 2021 in Kansas City, Missouri. (Photo by David Eulitt/

If the NFC Championship between Aaron Rodgers and Tom Brady is meant to be a throwback game between two icons in the twilight of their career, then Patrick Mahomes and Josh Allen meeting for the AFC Championship serves as the beginning of the next waves of great NFL quarterbacks.

Mahomes already has stamped his greatness credentials, winning a Super Bowl last year with the Kansas City Chiefs and winning an MVP award. Allen has moved into that discussion this season with the Buffalo Bills, becoming a perfect storm of strong armed throws and timely runs with his legs.

Add them together and you have the dynamics of a tremendous matchup for the Lamar Hunt Trophy and a ticket to Super Bowl LV on Sunday night (6:30 p.m., CBS) when the Bills head to Arrowhead Stadium to face the Chiefs.

Against the spread, Buffalo is 12-6 – the second best mark in the NFL this season by percentage. (Miami was 11-5 against the number.) Kansas City is 7-10 on the number.  The Bills have seen 11 of their 18 games go over the total while Kansas City is 8-9 on the over.

There are plenty of CustomBets, PropBets and other wagers available at FOXBet.com to suit any betters wishes. Check it out today and find the special offers that are in play for this championship weekend.

This is a rematch of a game on Oct. 19- a delayed game because of COVID-19 protocols that was won by the Chiefs, 26-17. Mahomes completed 21 of 26 passes for 225 yards and two touchdowns in the win. Allen also threw two touchdown passes, but he struggled as Buffalo only completed 14 of 27 passes for 122 yards.

This Is the third playoff meeting between the two teams, including games in the 1991 and 1993 playoffs that were won during Buffalo’s run to four straight Super Bowl appearances. Overall, the Bills lead the series, 26-22-1.

The biggest mid-week storyline of the game is the status of Mahomes, who left Kansas City’s 22-17 win over Cleveland midway through the third quarter because of a concussion. Mahomes was in concussion protocols on Wednesday, but Chiefs head coach Andy Reid expressed optimism that Mahomes could be ready. There was also a toe injury suffered in the first half of the win over the Browns that appeared to hobble Mahomes, but Reid said that injury wasn’t enough to keep the quarterback out.  If Mahomes can’t go, Chad Henne would get the call for the Chiefs which would change the entire dynamic of the game.

For the Bills, they were able to overcome a sluggish offensive performance thanks to their strong defense in a 17-3 win over Baltimore at home last week in strong winds and biting cold in Buffalo. The Bills broke the game open on Taron Johnson’s 101-yard interception return for a score. Allen and Stefon Diggs have become an elite pass/catch combo, but the Bills fate could rely on finding an ability to run the football with someone other than their quarterback. Buffalo rushed for only 32 yards on 16 carries against the Ravens. Without that running threat, the Bills could give the ball back to the Chiefs and Mahomes a lot. And that could be a real problem.