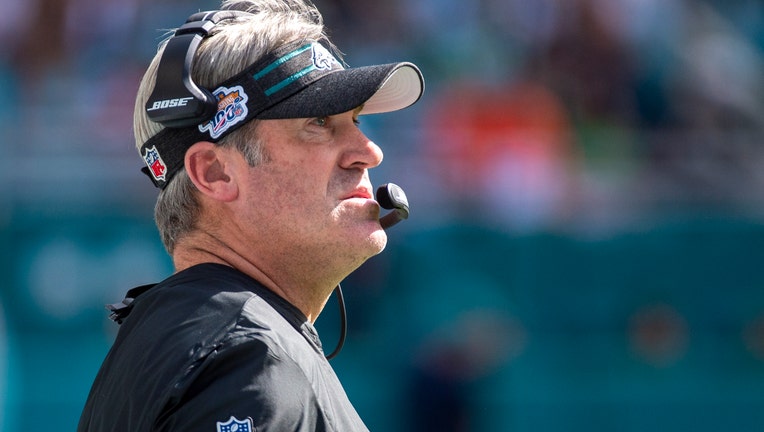 MIAMI GARDENS, FL - DECEMBER 01: Philadelphia Eagles head coach Doug Pederson on the sidelines during the NFL game between the Philadelphia Eagles and the Miami Dolphins at the Hard Rock Stadium in Miami Gardens, Florida on December 1, 2019. (Photo b

PHILADELPHIA - When John Harbaugh leads the Baltimore Ravens against Doug Pederson and the Philadelphia Eagles, bragging rights under Andy Reid’s coaching tree are at stake.

Harbaugh was Reid’s special teams coordinator for nine seasons in Philadelphia before going to the Ravens in 2008. Pederson was a quarterback under Reid and the holder for Harbaugh’s kicking unit in 1999 and later began his coaching career with Reid in 2009.

Both Harbaugh and Pederson beat Reid to a Super Bowl title. Harbaugh won it in his fifth season. Pederson hoisted the Lombardi Trophy in his second. Reid finally got his ring with the Kansas City Chiefs last season.

Harbaugh has a better chance than Pederson at another title this season. The Ravens (4-1) visit the Eagles (1-3-1) Sunday looking to extend their road winning streak to nine games.

“We both worked with Coach Reid, so I think we both kind of have a lot of the same views on things, maybe the same experiences,” Harbaugh said. “I have a lot of respect for Doug. The way he runs his program and the way he coaches his team, they do a great job with their guys and we understand that.”

The respect is mutual.

“He’s a guy who I’ve looked up to in my short time as head coach, somebody I’ve kind of studied in my career on how he’s approached the game, how he’s coached his teams, how he’s led his teams,” Pederson said of Harbaugh.

“He’s always got teams that are very competitive, highly competitive each week. He’s had a really good football team these past couple of seasons. It’s always fun to go against coaches that you’re familiar with and have a lot of respect for. It’s going to take, obviously, a great effort by us to compete in this game.”

Ten assistants who worked under Reid have become head coaches, including Washington's Ron Rivera, Buffalo's Sean McDermott and Chicago's Matt Nagy. Only Harbaugh and Pederson have won championships so far.

Reigning NFL MVP Lamar Jackson ran for a career-low 3 yards last week in a win over Cincinnati after missing a couple of practices with a knee injury and illness. He said he plans to practice all week. The Eagles expect to see the guy who dominated the league passing and running in 2019.

“Lamar Jackson is probably the most dangerous player in the league because there are times you can do everything right on defense and can’t catch him, or he can throw a ball sidearm underneath of a free rusher and complete a pass,” Eagles defensive coordinator Jim Schwartz said.

“I think that you’ve got to have a resilient attitude when you play him, and you know that a playmaker like him is going to make some plays. You just have to limit his big plays, and you have to stay resilient.”

Ravens punter Sam Koch will set a franchise record by playing in his 230th game. The 38-year-old Koch is currently tied with linebacker Terrell Suggs.

After being selected in the sixth round of the 2006 draft out of Nebraska, Koch immediately claimed the starting job in Baltimore and has never missed a game. He made the Pro Bowl in 2015 and also serves as the holder for kicker Justin Tucker.

“He epitomizes what success looks like over the long haul,” Harbaugh said. “A guy who’s dedicated to the process, taking care of the details (and) working extremely hard.”

Koch’s work ethic is appreciated by his teammates, too.

“He’s the epitome of what a Raven is,” cornerback Jimmy Smith said.

Carson Wentz has struggled this season, tossing a league-high nine interceptions. But he’s shown flashes of excellence the past two games and now has a reliable wide receiver catching his passes. Travis Fulgham, who was waived by Detroit and Green Bay in August, has emerged in the past two games. Fulgham caught 10 passes for 152 yards and one touchdown in a 38-29 loss at Pittsburgh last week.

“He’s a big-time player and we’ve seen what he’s done in practice now for a while and how he’s kind of come along within our offense, within our system,” Wentz said.

ROAR OF THE CROWD

The Eagles will have fans for the first time in their stadium. Occupancy will be limited to 7,500 people, including players, coaches, team and stadium personnel, media and fans. The Ravens played their past two home games before an intimate gathering of 250 immediate family members and saw even fewer fans at their two road games, so this will be their first matchup of the year before a bigger crowd.

“I think it’ll be fun,” Ravens running back Mark Ingram said. “I think everybody in the league misses the fans — whether that be your home fans or being away.”