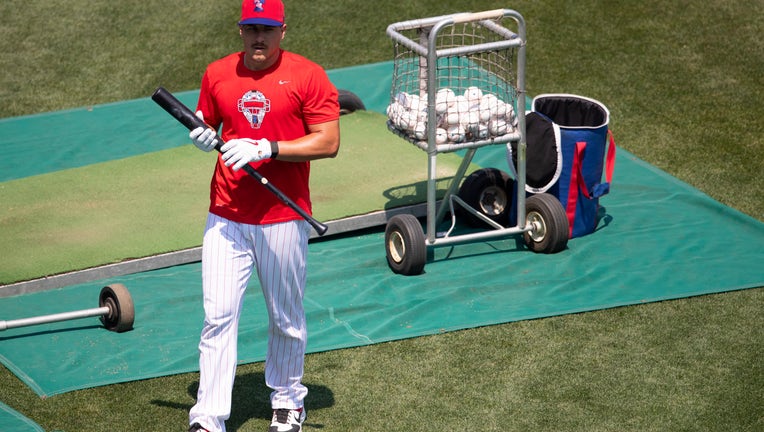 J.T. Realmuto #10 of the Philadelphia Phillies looks on during summer workouts at Citizens Bank Park on July 3, 2020 in Philadelphia, Pennsylvania. (Photo by Mitchell Leff/Getty Images)

The All-Star catcher and the Philadelphia Phillies had preliminary discussions about a long-term deal before the coronavirus pandemic but talks between the two sides haven’t progressed since baseball returned last week.

Realmuto is eligible for free agency after the season unless the Phillies sign him before he can test the market. He's expected to seek at least $20 million per season.

“It definitely concerns me, not necessarily for myself, but for the free agency class as a whole,” Realmuto said Thursday. “The top guys usually find a way to get their dollars. Teams are going to want them. Maybe it’s not 20 teams in on you, maybe five or 10. A lot of teams will be able to look at this as a time to take advantage and actually go for it instead of backing off because half the league will try to cut revenue and save money and the others will look at it as an advantage to press forward. It could affect free agency as a whole but for myself, I’m not too worried.”

Realmuto hit .275 with 25 homers and 83 RBIs and led the league with 43 runners thrown out in his first season in Philadelphia in 2019, earning his second straight All-Star selection. He was acquired from Miami shortly before spring training last year in a deal that sent Philadelphia’s top pitching prospect, Sixto Sanchez, to the Marlins.

Realmuto quickly become Bryce Harper’s favorite teammate in Philly. Harper was on base when Realmuto hit a homer in a scrimmage Wednesday. He crossed the plate, looked up in an empty stadium and screamed: “Sign him!”

Realmuto lost his arbitration case in February and received a raise from $6.05 million to $10 million instead of his $12.4 million request. He said he doesn’t harbor any resentment over losing.

“I love this organization,” he said. “They’ve been great to me and my family since I showed up. From top to bottom, they’re good people and they care about baseball. That’s important to me.”

Phillies manager Joe Girardi called Realmuto a “happy-go-lucky” guy who “loves to be on the field” and he doesn’t expect the contract situation to be a distraction.

“He’s the same person every day, happy to be here, wants to play and help the team win,” Girardi said. “When he came back from his arbitration case, his personality hadn’t changed and he had a smile on his face.”