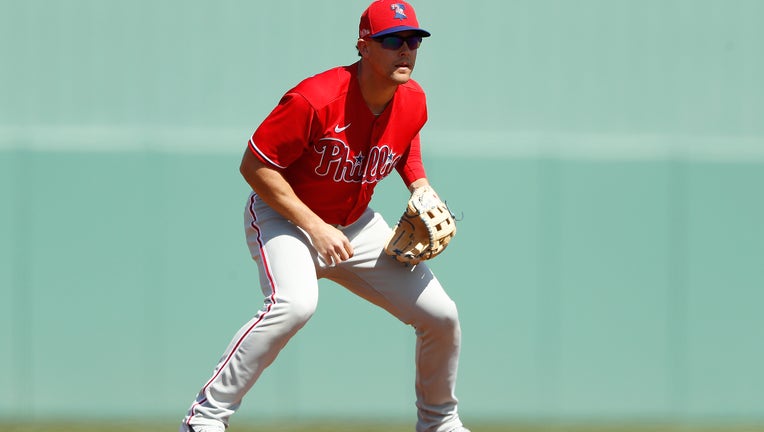 Scott Kingery #4 of the Philadelphia Phillies in action against the Boston Red Sox during a Grapefruit League spring training game at JetBlue Park at Fenway South on February 27, 2020 in Fort Myers, Florida. (Photo by Michael Reaves/Getty Images)

PHILADELPHIA - The Philadelphia Phillies have confirmed Scott Kingery and Tommy Hunter were among a group of players and staff who had tested positive for coronavirus.

Phillies GM Matt Klentak says both Kingery and Hunter are feeling better and are going through protocols in order to make their return.

Klentak also confirmed that Hector Neris and Adam Hasely are back in camp, adding that Hasely was delayed due to a coronavirus testing error.

Three coaches that were in Clearwater also tested positive for the virus. It is not yet clear if they will return once they recover.

Pitcher Aaron Nola returned to camp Monday after waiting a few extra days because he was in contact with someone who tested positive for the coronavirus.

The Phillies have had seven players and five staff members test positive for the virus.

The Phillies are scheduled to open the 60-game season at home against Miami on July 24.

Zack Wheeler, the No. 2 starter behind Nola, is in camp but uncertain about staying because his wife is due to deliver the couple's first child later this month.