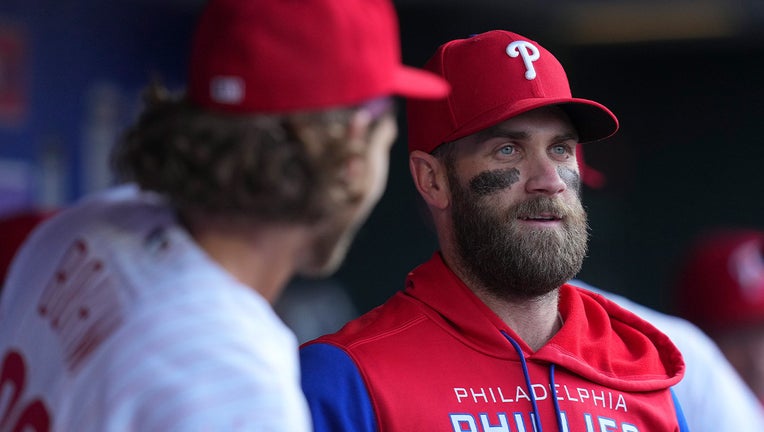 PHILADELPHIA, PA - MAY 03: Bryce Harper #3 and Alec Bohm #28 of the Philadelphia Phillies look on from the dugout against the Texas Rangers at Citizens Bank Park on May 3, 2022 in Philadelphia, Pennsylvania. The Rangers defeated the Phillies 6-4. (Ph

PHILADELPHIA - Here's a pretty cool hat trick from NL MVP Bryce Harper. The Phillies slugger swapped caps — and the NL MVP even autographed his hat — with a fan in the Citizen Bank Park stands.

What a great way to cap off a day at the ballpark.

And guess what? It was Harper — not the Philly-area native and fan — who initiated the trade.

Harper missed his fourth straight game from the lingering effects of platelet-rich plasma injection in his right elbow. So the fan-friendly star killed time scanning the scene from the dugout during an afternoon game against the Padres. Harper found a hat on a fan near the dugout that caught his eye — a maroon bill with "Philadelphia Phillies" and the P on the top.

Gavin McHugh, a 21-year-old senior at Auburn, was at his first Phillies game of the season with some friends, and they had tried to get Harper's attention "just for the hell of it." McHugh posted on his Instagram stories photos from his second row diamond club seat near home plate and wrote early in the game " this will do."

McHugh and has fans tried to catch Harper's attention in typical Philly style.

Harper waved at the fans, and McHugh and his friends "were pretty amped, pretty hyped."

Headed into the bottom of the sixth, the group noticed Harper not only tried to get their attention, but he autographed his maroon, game-official Philadelphia Phillies hat.

"We were looking around like, what little kid is he about to give this hat to," McHugh said by phone.

McHugh's social media feeds blew up as he tweeted about the exchange. The hat, though, belonged to a friend of his who had just bought it Thursday at one of the ballpark stands.

"He was like, ‘Yo, bro, can I swap hats with your boy,’" McHugh said Harper told him.

The trade was caught on TV and a lazy Thursday afternoon suddenly exploded on social media for McHugh. McHugh said he did not know Harper but laughed, "hopefully we can get connected down the road."

Just a bit of an upgrade from an ordinary foul ball.

"Just really liked the hat, so I signed mine and asked if he wanted to trade," Harper told MLB.com. "He was really cool about it and made it happen. Always fun interacting with the fans here at home."